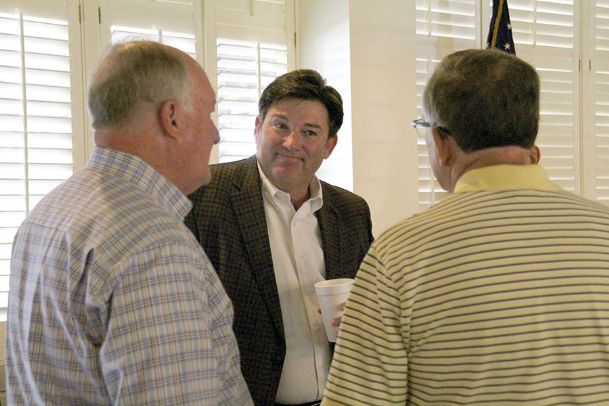 The plan, MississippiCares, seeks to assist non-disabled Mississippians between the ages of 19 and 64 who earn too much to qualify for Medicaid, but don't earn enough to be eligible for Affordable Care Act Marketplace premium tax credits. Between 163,000 and 300,000 Mississippians are affected.

"We don't want any more of the same," Moore said. "Let's do something different, which is what we're trying to propose."

To be enacted, the plan requires state legislative action and federal approval.

The plan's benefits for participants would mirror those for adults through the Medicaid plan with the exception of non-emergency transportation services. This would allow for unlimited physician visits, and include dental and vision coverage.

Under MississippiCares, adults earning up to 138 percent of the federal poverty level could receive coverage at a reduced cost, Moore said. The income at that level translated to just over $17,000 for an individual or about $35,000 for a family of four this year.

"They need improved quality of care and access to that care," Moore said.

Under the plan, recipients and hospitals would share the cost of the 10-percent match. Patients would pay a $20 monthly fee, $240 a year, and a $100 copayment for non-emergent visits to a hospital emergency department when a federally approved urgent care or health center is within 20 miles of the hospital.

The hospitals would cover the rest of the costs, Moore said.

"From a hospital perspective, this is an investment," Moore said. "Probably the biggest thing you can possibly do to help rural hospitals in the state of Mississippi, and our leadership will not listen to that."

Moore said there could be no increase in taxes and no additional cost to the state, through a 3-percent premium tax, based on an approximate $5,000 premium cost per member. If the proposed plan had 300,000 participants, the tax would generate around $45 million in state revenue.

Members of the proposed program would participate in job-training and work-force-skills building programs, Moore said, as one-third of the population within the 163,000 to 300,000 range are unemployed.

The component of the proposed health care program makes it more of an "economic stimulus."

"Let's be able to recruit higher-paying jobs in the state of Mississippi," Moore said. "Let's be able to fill some of these jobs that we've got out there if we educate that group to a higher level."

Moore detailed plans to enact the Mississippi plan the same way Pence enacted Indiana's expansion, through a 1115 Demonstration Waiver, that would allow the state to receive federal funding mandated for Medicaid expansions to try something new.

The Mississippi Legislature would have to amend sections of the state code related to hospital assessment and eligibility, Moore said, for the plan to be approved and enacted.

Moore fielded questions from Rotarians about how uncompensated care costs have changed from year to year and how the plan makes managed-care organizations into "losers."

Moore's offered what he called a conservative estimate that uncompensated care has gone up 2.5 to 3 percent each year, at about $600 million this year.