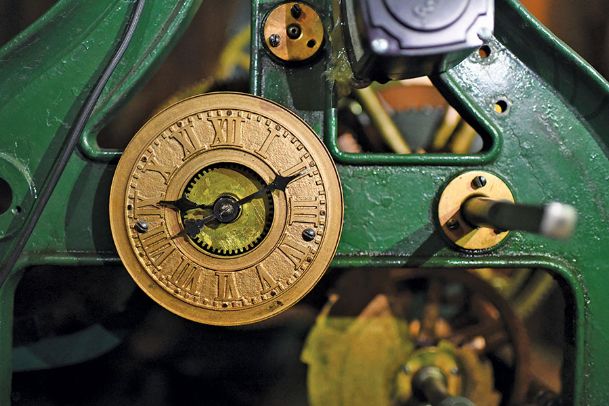 The internal clock in the Mississippi University for Women clock tower has a series of gears and shafts that connect it to the hands on the clock faces seen on the tower's exterior. This clock was manufactured in 1885 by Seth Thomas Clock Company. Photo by: Jennifer Mosbrucker/Dispatch Staff 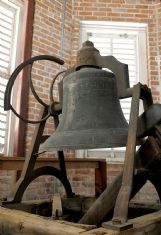 The bell in the MUW clock tower originally rang with the help of a rope that extended from the bell to the bottom of the tower in a shaft. When the mechanism used to rotate the clock broke, a hammer was installed that strikes the bell from the side.
Photo by: Jennifer Mosbrucker/Dispatch Staff

Dates of when the clock was last serviced are written on the door of a small enclosure that holds the main clock.
Photo by: Jennifer Mosbrucker/Dispatch Staff 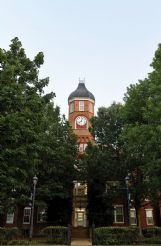 Callaway Hall on the Mississippi University for Women campus was a hospital during the Civil War.
Photo by: Jennifer Mosbrucker/Dispatch Staff 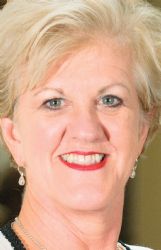 After what she guessed is more than 10 years of silence from the historic clock tower, Miller suddenly heard the bell while she was standing out on her porch one Sunday afternoon in March.

"I thought, 'Oh, maybe it's one of the churches that just got out,'" she told The Dispatch. "But then I walked toward the sound and realized, 'No, it's the Callaway bell tower.' ... The bell rang about 17 times and then stopped. Then it rang again about a half-hour later. Ever since then, it's been running as if it never stopped in the first place."

MUW Director of Facilities Management Jody Kennedy found a series of misaligned microswitches inside the clock's mechanism caused the bell to stop chiming on the hour. After fixing those, the clock is operating correctly and accurately.

He's not exactly sure why the bell started ringing again, seemingly at random, but guesses a "critter of some kind" may have been the cause.

"All it would take is a mouse or something running past those switches," he said. "Maybe it ran over the switches and just nudged them the right way. Could've been a happy accident. Who knows?"

The switches will need to be adjusted frequently to ensure that the bell mechanism doesn't stop working, but the bell and clock are both once again in perfect working order, Kennedy added.

An integral part of MUW history

When Miller was a freshman at MUW in 1979, she relied on the clock tower and its resounding peals to keep her from getting into trouble. In those days, first-semester freshmen had a nightly curfew. If students weren't at least on the porch of Peyton Hall -- then the freshman women's dorm -- by the time the clock struck midnight, there were consequences.

"There were many nights that I would be running across campus, trying to get to the porch before that last bell," she said. "Looking back it was kind of exhilarating cutting it so close, in the way that sort of thing can be fun when you're in college."

The bell tower was erected atop Callaway Hall -- the oldest building on MUW's campus and the current dormitory for female upperclassmen -- in 1885. The tower was part of the celebration of the then-private Columbus Female Institute becoming the public Mississippi Industrial Institute and College. Callaway Hall, as well as the bell tower, are on the National Register of Historic Places.

While researching the bell inside the clock tower after it began to chime again, Kennedy unearthed a copy of the original invoice for the bell dated May 26, 1885. Back then, a clock tower bell cost $625 -- about $16,504 in today's money.

"They really went all out with that celebration," Kennedy said. "And students have been making it part of their history ever since."

Although the bell was delivered in mint condition, it has since become host to students' signatures spanning centuries, a permanent homage to generations of young adults sneaking up to the dormitory's fourth floor to leave their mark. Even the bell tower itself is not totally pristine -- the phrase "Here lies Mary" is written, along with several other phrases, on the white shutters that let light and air into the tower from the outside.

Kennedy said "Here lies Mary" is a reference to the campus ghost story of a woman named Mary who served as a nurse when Callaway Hall was a war hospital from 1861 to 1865. According to the story, Mary nursed a wounded soldier back to health, fell in love with him and was devastated when he never returned to her. She was so distraught that she took her own life by jumping from a window in the bell tower, and her spirit haunts it to this day.

"There's a pretty big hole there, though," said Miller, who said she can recount the story on demand after years of hearing it repeated. "The clock tower wasn't built until well after that. So if the story is true, maybe someone embellished it a little for the dramatics. But you never know, I guess. Nothing is certain."

Ghost or not, Miller said she's glad to hear the bell ringing again.

"That tower is such an iconic and important part of our campus and it makes me glad to hear the bell again," she said. "At first, that first Sunday, I was shocked and confused, but now I'm just delighted."

This time, she added with a laugh, she no longer has to worry about making a run for her front porch when the bell tolls at midnight.