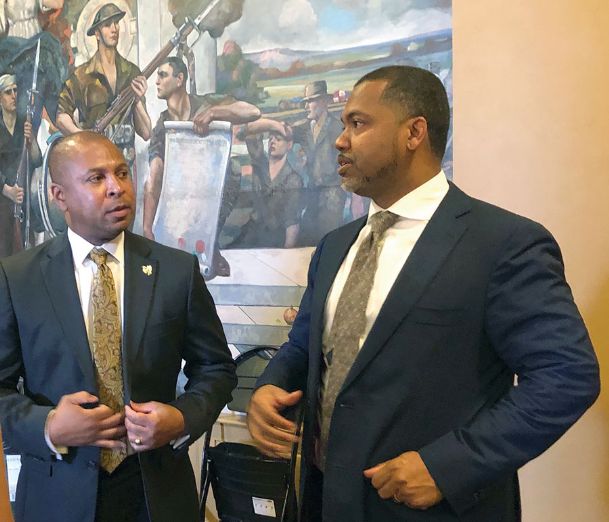 STARKVILLE -- While driving through the Golden Triangle, Manny Scott began to pray for guidance in what he should say to the Starkville-Oktibbeha Consolidated School District teachers, staff and administrators during Thursday's convocation.

He is no stranger to Mississippi -- some of his family lives a few minutes outside Jackson and he visits as often as he can -- so he could make a few educated guesses about the topics teachers would receive well. Still, he said, prayer never hurts.

"I just had this feeling that teachers here needed the reminder of their ability to be the salt and light in classrooms, where it's needed most," he said, referencing a Bible verse. "I sensed there are many Christians in this district, so I wanted to bring up that modern example of a way to put that verse into action."

As keynote speaker for SOCSD's convocation in Lee Hall's Bettersworth Auditorium at Mississippi State University, Scott's speech centered around his turbulent childhood and, most notably, experience at Wilson High School in Los Angeles, California where, more than 30 years ago, he was part of Erin Gruwell's English class. Scott spoke about how he and his fellow students -- most of whom were struggling academically, all of whom came from broken and violent neighborhoods -- initially thought this "new, white cheerleader" of a teacher wouldn't stick around.

"Some of the guys tried real hard to get her to quit," he said. "And she'd sometimes cry at her desk after school. I'd see her. But she'd always get up and come back the next morning with a smile on her face. No matter what we did to her."

Finally, Gruwell found a way to reach her students. In an effort to both improve students' writing skills and help them process the trauma of their daily lives -- gang violence, turbulent home lives and a volatile school environment -- she gave each student an assignment that seemed strange to Scott and his fellow students. They were to write a journal in a composition book. They could write about whatever they wanted, as long as it was a true and honest account of the details of their lives and how they felt about the challenges they faced every day. That project earned the students the title "Freedom Writers," and that assignment, and the impact it had, was the subject of a 2007 film by that same name.

"All it took was one teacher who cared enough about her students and took the time to learn about who she taught and not just what she taught," he said. "She recognized something I desperately want all teachers to understand. All students need grit. But some of them need healing first. ... Build relationships with your students and show them you believe in them."

'Student of their students'

Scott also urged teachers to be "students of their students" and to evaluate their course content and materials to be sure their students' experiences are reflected in things like reading assignments and teaching examples.

"Understand what the culture is, understand the music they listen to, the references, the slang," he said. "Learn from them and immerse yourself in their world, and you'll learn how to reach them. ... But if students don't feel like their struggles are understood and represented, they're not going to engage with you."

That was a message that "resonated into (the) soul" of Armstrong Middle School teacher Tonya Barnes. A teacher for more than 25 years -- the last five in SOCSD -- she said she intellectually knows the value of forming bonds with her students. But sometimes it can be hard to remember to make that a priority in the hustle and bustle of the year, she said.

"You hear that all the time about building relationships," Barnes said. "But it is so true. You never know what's going to walk through the door. ... We have to have the love to see through these students' hard shells and to their core. So Mr. Scott just affirmed what I already know, and I really needed to hear that."

Barnes said she was also encouraged by Scott's reminder to be a "student of students." As the mother of a child with autism and a teacher of children "in some of the most difficult years of life," she said she needed the reminder that children want to be understood, and that the adults in their lives should try their best to do so.

"You have to have patience," she said. "You have to engage with them and you have to show them their lives matter by giving them assignments and people they can look up to. You can't be out of touch. ... The world works so differently and they're exposed to so much more information all the time, so we have to learn to compete with that."