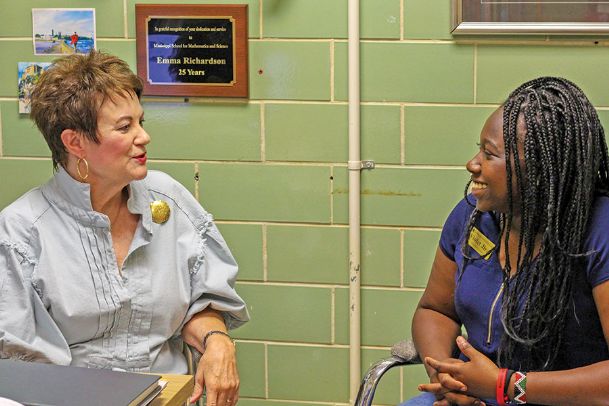 Mississippi School for Mathematics and Science creative writing teacher Emma Richardson, left, speaks with her former student, MSMS senior Violet Jira. Jira is one of three MSMS students whose short story based off an oral history from a Mississippi resident was published in Write for Mississippi's second book, "Call and Response." Photo by: Amanda Lien/Dispatch Staff

Violet Jira was sitting in her language class when she learned she was officially a published writer.

The semester before, the now-senior at Mississippi School for Mathematics and Science had worked on one of many short story assignments for her creative writing class. Most of those assignments were prompted by her teacher, Emma Richardson. This assignment, however, was prompted by Write for Mississippi, a nonprofit created to equip high school students and their teachers to use creative writing as a tool for social change.

Jira and her fellow classmates were given a list of oral histories collected by Write for Mississippi from senior citizens all over the state, and were tasked with turning those memories into a work of fiction.

It was a daunting task for Jira, to say the least.

"Because we had to choose from real people's stories, that definitely added an extra layer to the project," she said. "I wanted to stay true to the memory, but I also wanted to put my own spin on it."

As Jira recounted the memory she chose -- from a Eupora resident who recalls picking cotton at the age of 6, working so hard and long his fingers bled -- Richardson thumbed through her copy of "Call and Response," the book recently published by Write for Mississippi that contains three MSMS students' short stories, along with 40 others collected from high schools statewide.

Richardson's students weren't required to submit their short stories to Write for Mississippi for publication. They just had to write them and turn them in for a grade. But Richardson was gratified that some chose to go a step further.

"I only gave them the assignment," Richardson said. "My class just had to select an oral history and turn it into a story. So I don't know how many decided to submit them for the book, but I'm really proud of them for doing it."

This is Richardson's second time involving her class in a Write for Mississippi project. Richardson, who has taught at MSMS for 31 years and will retire this December, said she found great value in this year's set of prompts because it encouraged the students to fully adopt another person's point of view.

"Last year, the prompt was a question, which gave them a lot of room to be creative," she said. "... But it becomes different when you're reading through someone else's eyes and taking that memory and turning it into a story. ... You can still be creative, you just have to do it in a different way."

Most of Richardson's students, like Jira, tried to incorporate elements of the familiar into the oral histories that, often, were from another time and another place.

"I've never picked cotton until my fingers bled, but I wanted to weave what I had experienced into the story somehow," Jira said. "My character, Sky, is a lot like me in some ways. And when we first moved to my hometown, we had a neighbor that would bring us jam, like in the story. ... Those were my ways of staying true to the story but also adding something modern to it."

Madison Wypyski, who graduated MSMS in May, also chose to highlight the familiar in her story, which was also published in "Call and Response."

Wypyski chose the memory of a Greenwood resident's frolics through New Orleans with her friends when they were young. That memory struck a chord with Wypyski, who used to live near New Orleans and will attend Tulane University in the fall.

"I wanted to lean on those memories I had and weave them into the oral history I had chosen," she said. "I wanted to write about her in New Orleans, having the time of her life, and I wanted to do it so that if you took away all the street names, all the identifiers of the city, you would still know it was New Orleans. Culture seeps out of every crack in that city and I wanted to capture it for both of us."

For Wypyski, the challenge of balancing a true memory with a fictional story made the assignment challenging, but also fun in an unexpected way. Although she read a lot for fun in high school, she rarely viewed writing as anything more than an assignment until she began working on her project for "Call and Response."

"It's something I'm going to continue to do as a passion," she said. "It's been life-altering in so many ways."

Michelle Luo, the third MSMS student to be published in "Call and Response," said she enjoyed the chance to practice some of the writing techniques Richardson taught her class. Luo's story, which was told through the perspective of a 14-year-old girl learning how to take her mother's place in her household, challenged her, she said.

"At first, it was just another assignment, but it stretched me because I had to write as a younger child," she said. "... And I think we assumed that if our stories were selected, the people who gave us the prompts would read it. So I didn't get super experimental with it. It was very grounded in reality."

For Richardson, holding "Call and Response" in her hands is a testament to the importance of creative writing at MSMS. She recognizes that students don't have to take her class, and is encouraged that there continues to be such a demand.

"There are plenty of students like Violet that choose to take the class and do so well," she said. "In schools, the arts aren't always as valued. But here, we still value those and I'm encouraged that our students do the same."