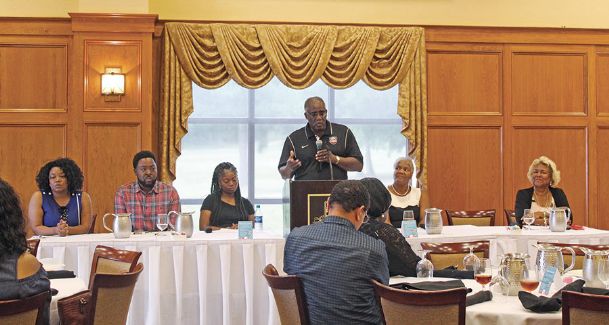 Issues facing the city from its finances to sewer and drainage problems and ongoing clean-up in north Columbus from a Feb. 23 tornado were topics raised by candidates hoping to fill the recently vacated Ward 4 city council seat during a forum at Lion Hills on Friday.

The candidates are running to replace former councilman Fred Jackson, who resigned after two years on the council. His term expires in 2021.

In answer to a question from Brooks about the issues the city is facing, nearly every candidate named city finances as one of the most pressing issues for the city, with only Lewis answering that drainage issues and storm clean-up are more of a priority for Ward 4.

"We should know how to count if we are leaders and we need to hold someone accountable if they are handling the money," Douglas said.

The comment referred to former Chief Financial Officer Milton Rawle's resignation from his position in March. Columbus operated at an $881,000 deficit in Fiscal Year 2018, which ended Sept. 30. Rawle did not report that information to the council until November, when he asked them to amend the budget for the already completed fiscal year.

Days after the resignation, certified public accountant Mike Crowder, who was hired as a consultant for the city, reported to the council that at current spending rates, the city would be more than $338,000 in debt at the end of the fiscal year. Finances have been an ongoing concern for city councilmen ever since.

"We can't solve any of our other issues if we don't get right financially," Brown said.

The candidates also said they feel the city is divided, with some, such as Gibbs-Gray, adding they felt city leadership hadn't been serving Ward 4 in recent years. She said less money has been spent on special projects in the last two years, and that citizen concerns about drainage, downed trees and dilapidated homes are going unanswered by city departments.

"What's going on that the city of Columbus is not going out addressing ... issues with these homes, with the sewer system, the water, the drainage?" she said.

While Beard said he felt much of the cleanup in Ward 4 has been going well -- he took a moment to praise city efforts as well as nonprofits and volunteers who have helped with cleanup -- he agreed that city leaders needed to "rebuild trust" between themselves and the community. He added that was especially important with two new members joining the council. The Ward 1 seat is also vacant after Ward 1 Councilman Gene Taylor died on Aug. 5.

"We're going to have two new people joining the council, rest in peace Mr. Gene Taylor, but going forward we're all going to have to be on one accord, the entire city, to bring the city back together," he said.

Candidates also talked about issues affecting youth, with Lewis in particular arguing the city needs more activities for children and teens to keep them out of trouble.

Another forum will be held, this one hosted by Memphis Town Community Builders and the Columbus-Lowndes Federation of Democratic Women, at Genesis Church on Aug. 18 from 4-6 p.m. Dispatch Managing Editor Zack Plair will moderate the forum.