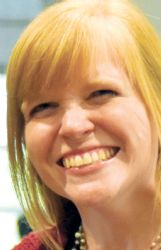 One of the best things about the Salvation Army, in Katie Walker's opinion, is that 80 percent of goods and donations to the Starkville branch stay in the Starkville area.

"If you live in Oktibbeha County and you want to give money, we want you to know that that money is supporting your neighbors, supporting those people that you see at the grocery store and who your kid goes to school or plays sports with," said Walker, the service center manager for the Salvation Army Starkville, at the Starkville Rotary Club meeting Monday.

She has a master's degree in social work from the University of Texas and has held her position since 2014.

Rotary Club members have volunteered with the Red Kettle Campaign every Christmas season since the Salvation Army came to Starkville in 1984. Walker said in an interview that the club's commitment to the campaign for so long "just kind of blows my mind" sometimes.

"It's a testament to their willingness to give back and to serve the community," she said.

More than 1,600 people volunteered roughly 1,620 hours of their time in last year's Kettle Campaign, Walker said in her speech. In the five years she has worked for the Salvation Army, the campaign has raised more than $50,000 and the organization has not had to hire any bell-ringers. Volunteers allow the Salvation Army to use monetary donations to serve the community instead of hiring people, Walker said.

The nonprofit began a partnership with Mississippi State University Housing and Residence Life in 2017 for students to donate nonperishable food, gently used clothing and other household items that customers at the Family Store "would be proud to purchase," Walker said.

The Salvation Army works with school social workers to identify and help families in need, and it partnered with Walmart nationwide this year to provide school supplies throughout August as children are starting the school year.

There is no formal needs assessment for the community, but Walker gives customers all the information they need to get help, she said.

"We want people to have basic needs met so that they can do their best and their part to be successful," Walker said.

The Rotary Club is making a donation to Smile Train, a nonprofit that provides corrective surgery for children born with cleft palates, as a show of appreciation for Walker's work, Rotary Club president Sid Salter said.