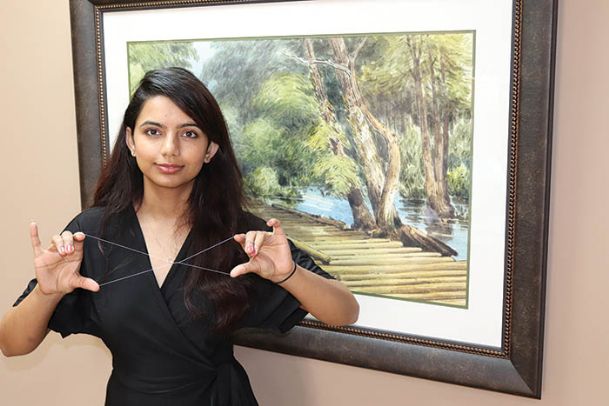 Former business owner Dipa Bhattarai demonstrates how to twist thread into the necessary shape for removing hairs in a practice called eyebrow threading. Bhattarai owned two eyebrow threading businesses in Starkville and Columbus, which she shut down after learning she had to obtain a license from the Mississippi Board of Cosmetology to thread. She has sued the board, arguing its requirements for becoming a threader are too stringent and infringe on her economic liberties. Photo by: Courtesy photo 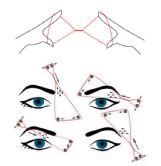 This illustration demonstrates how threaders remove eyebrow hairs using a loop of thread twisted into an hourglass shape to make a âshuttleâ which captures hairs and removes them. The illustration was included in a complaint which eyebrow threader Dipa Bhattarai filed in a lawsuit against the state board of cosmetology.
Photo by: Courtesy photo

A former business owner in Columbus and Starkville has filed a federal lawsuit against the Mississippi Attorney General's Office and state Board of Cosmetology, arguing the board's regulations impose unfair restrictions and forced her to shut down her eyebrow threading business.

Aaron R. Rice, an attorney with the Mississippi Justice Institute, filed the lawsuit on behalf of Dipa Bhattarai, a University of Mississippi graduate student who attended Mississippi University for Women and had two eyebrow threading businesses in Columbus and Starkville between 2017 and 2018. Bhattarai is arguing the Board of Cosmetology's stringent licensing requirements -- which include 600 hours of training, many of which teach skills she said were not required for her business -- infringe on her economic liberties.

The case is being heard in the Southern District of Mississippi's federal court in Jackson. A business partner of Bhattarai's, Tyler Barker of Tennessee, is also named as a plaintiff in the lawsuit.

"This is a completely new job that (is being) introduced into the (Mississippi) market," said Bhattarai, who has a degree in accounting from MUW and is currently pursuing a master's in taxation and data analytics. "So I would just love to train people how to do it and open businesses in several locations, not just one location, and let them work there (and) handle business over there."

Sharon Clark, executive director of the Board of Cosmetology, declined to comment on the lawsuit. A spokesperson for the AG's Office said the office is reviewing the case.

Eyebrow threading is a method of grooming eyebrows by tying a strand of cotton thread into a loop, twisting the loop into an hourglass "shuttle" shape and removing hairs by capturing them between the shuttle and pulling them from the skin, according to the complaint.

"It's a non-invasive type of (hair) removal," said Terrance Bonner, owner of The Glam Station and Spa on Military Road, and one of the few estheticians who practices eyebrow threading in the area.

Bonner said for some clients, such as those who use particular skin and facial products or who routinely take blood thinners, eyebrow threading is better than waxing or other hair removal techniques because it's less likely to pull the skin.

Bhattarai's complaint said threading requires less training and fewer sanitary procedures since it does not involve skin-to-skin contact, sharp instruments, chemicals or wax. All that is required is for threaders to keep their hands and work space clean and to "use a fresh, sanitary strand of thread" for each customer.

Bhattarai became a threader when she was a teenager in Kathmandu, Nepal, where eyebrow threading is a common practice. She said she'd watched her aunt practice it in her beauty salon after school and eventually learned how to do it herself, even obtaining a beautician's certification when she was 17. When she began attending MUW as an undergraduate student in 2013, she began threading for her friends, who suggested she open a business.

In 2016, Bhattarai opened Tiara Eyebrow Threading in Leigh Mall. A year later, she opened On Fleek in Starkville. Bhattarai said she taught four other threaders, and the business charged $15 for a threading session that usually took about 10 minutes.

"We were threading and sometimes we were doing this thing called henna tattoo, which is not like cosmetology or anything like that," she said. "It's more like face-painting. We would just do it with temporary ink. That was not even part of our main business. It was just something we offered on the side. Mostly it was eyebrow threading, nothing else."

According to the complaint, a Board of Cosmetology inspector issued citations and had Bhattarai shut down the businesses. Since then, Bhattarai has made multiple attempts to speak before the board, requesting at different times she be allowed to practice eyebrow threading without a license and that she be allowed to sit for the esthetician license exam without going through the training. The cosmetology board denied both requests.

According to the board's website, esthetician licenses -- the license required to become an "eyebrow archer," a definition which includes threading, Rice said -- can only be issued to those who have completed at least 600 hours of training at an accredited school of cosmetology.

However, Bhattarai argues that the training would cost money and take time away from her graduate studies. Moreover, she said, the training would have minimal focus, if any, on eyebrow threading as opposed to other beauty techniques.

"When you're in school, it's already so hard because you have so much to do," Bhattarai said. "Having ... to go through all this unnecessary travel, I feel like it's sometimes hampering my study. (The) semester when my business got closed, I felt like it was the reason my study was hampered so much. I'm not a person who gets low grades or anything like that, but at that time I was making really low grades as well.

The complaint requests the court rule the board's requirements unconstitutional and issue an injunction against further enforcement of the requirements on eyebrow threading, said Rice, who added that other states do not require threaders to receive as much training.