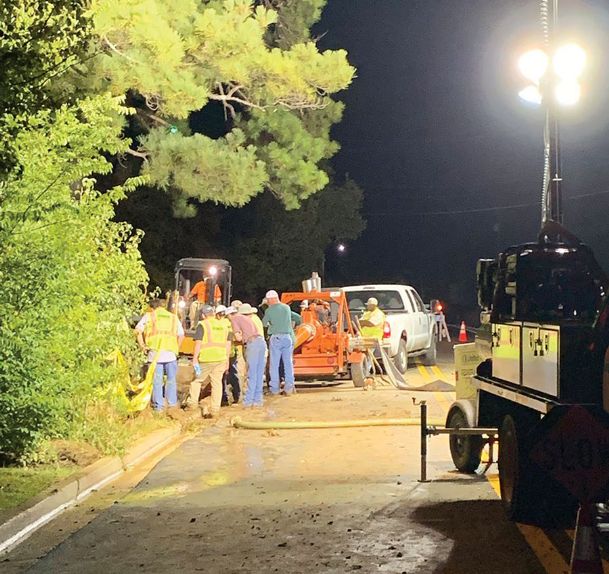 Crews work overnight on a busted water pipe on Locksley Way in Starkville. The entire city is under a boil water notice until Saturday. Photo by: Courtesy photo/Twitter

The entire city is under a boil water notice after a contractor for Atmos Energy Corporation split a 20-foot section of water pipe Wednesday evening on Locksley Way.

Starkville Utilities Department temporarily cut off water for much of Starkville south of Highway 12 while the pipe repair was underway. It was originally estimated to take about an hour, but SUD employees "pulled an all-nighter" to complete it, Mayor Lynn Spruill tweeted this morning.

Low water pressure quickly spread from south Starkville to the rest of the city as the repair took longer than expected, so the boil water notice had to extend to the entire city, Spruill told The Dispatch.

The boil water notice does not apply to the Mississippi State University campus, according to the emergency information Twitter account MSU Maroon Alert.

The boil water notice will run through at least Saturday, enough time for the city to test water samples, according to the City of Starkville Facebook page.

The state Department of Health requires cities to issue a boil water notice when water pressure drops below 20 pounds per square inch, and the city has to make sure the water is clear of harmful bacteria before lifting the notice, SUD Assistant General Manager Jacob Forrester said.

"We're working diligently around the clock to make sure this is safe as quickly as we possibly can," he told The Dispatch.

Starkville-Oktibbeha Consolidated School District contacted parents through text messages and social media posts this morning indicating schools are operating on a regular schedule for Thursday and Friday and encouraging parents to send bottled water to school with their children. The district made sure schools had bottled water on hand, and many parents donated cases of bottles to schools, SOCSD Public Information Officer Nicole Thomas said.

"I saw several teachers buying water for the classrooms this morning before the coffee was even ready," school board member Wes Gordon tweeted about 6:30 a.m.

School cafeterias already sell bottled water every day, and cafeteria staff is aware that they need to boil water for cooking and washing dishes, Thomas said.

"We were fine and it wasn't affecting us at all the first part of the night," Lofing said.

The water pressure went down around 9 p.m. at the Grill, so the restaurant closed more than two hours early. Employees stayed to wash dishes with water rerouted from Sweet Peppers Deli, Lofing said.

All four Eat With Us restaurants will be open during their normal hours today and "are going above and beyond" to keep customers safe, Greater Starkville Development Partnership Interim CEO Jennifer Prather said. They are working with Clark Beverage Group to get bottled water and canned soft drinks instead of providing fountain drinks, and they are taking extra measures to make their dishwashing systems as sanitary as possible, she said.

929 Coffee Bar on Main Street is operating on a limited menu but can serve cold brew, and employees are boiling water for pourovers and hot tea, coffee manager Milo King said. Bottled drinks like soda, water and beer are all available.

The Starbucks on Highway 12 will be closed until the boil water notice is lifted.