As Presley presses for action, 4-County explores offering broadband at its pace 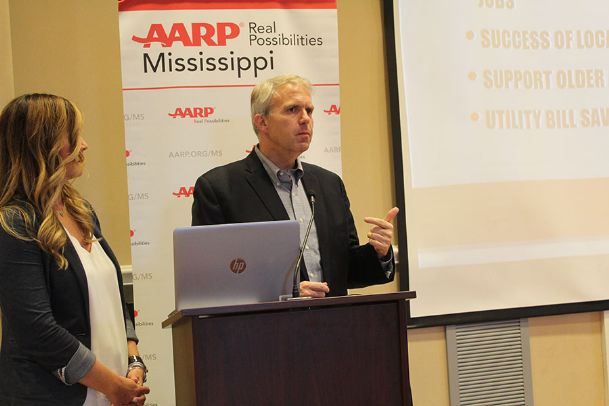 Brandon Presley, Public Service Commissioner for the Northern District, talks to a small group of citizens at MUW Thursday. Presley is pressuring 4-County to more actively explore the possibility of offering broadband internet to its members. The co-op's spokesperson says it's a possibility they're exploring, but at their pace. Photo by: Jennifer Mosbrucker/Dispatch Staff 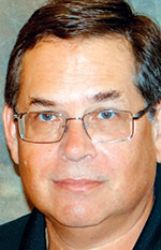 Northern Public Service Commissioner Brandon Presley says the only way for rural Mississippians to access high speed internet is if electric cooperatives in the state provide it to them.

He's traveling from community to community encouraging citizens to lobby their co-ops to look into providing internet service in addition to electric power.

"(Member-owned electric cooperative) is the only model that will ever in your lifetime serve our rural citizens with the same quality of service as bigger cities have," Presley told a group of about 15 citizens at a public meeting at Mississippi University for Women Thursday night. "It will not happen any other way."

Earlier this year the Legislature passed a law giving electric cooperatives the option to provide their members broadband, a law which Presley championed. So far, three cooperatives have announced plans to provide broadband, with more in various stages of looking into it, including most recently Monroe County Electric Cooperative. But Presley said he feels many cooperatives in the state - including 4-County Electric Power Association, which serves parts of Lowndes, Oktibbeha, Clay and six other counties - are moving too slowly when it comes to exploring that new option.

"If not you, who?" Presley said Thursday, referencing 4-County. "You owe that answer to your members."

But 4-County spokesperson Jon Turner told The Dispatch Friday that providing internet services to its approximately 38,000 members is significantly more complex than Presley is making it out to be. For one thing, it's asking a company that provides electricity to branch into an entirely different industry, which its employees don't know much about.

"We didn't ask to be brought into the broadband business," Turner told The Dispatch in an interview Friday.

Prior to the new law being passed, 4-County commissioned a marketing study of its most rural members to gauge how interested they were in high-speed internet, and the co-op has spent between about $25,000 commissioning two feasibility studies, Turner said. 4-County's board and leadership are also consulting with internet experts and meet weekly to discuss broadband.

But the feasibility studies show it would cost at least $115 million to offer broadband to interested members. The law prevents co-ops from using money from electric rates to pay for that, meaning 4-County would most likely have to take out loans to get the process started. If internet ends up not making money, 4-County would have to up its electric rates to pay off those loans, Turner said.

For that reason 4-County doesn't want to rush the process, even if Presley and some of its members would like to see them move faster. Moreover, he said, it's "unfair" for Presley or anyone to characterize 4-County as resistant to the idea.

"We don't want to get bullied into rushing into a huge endeavor," Turner said.

It was north Mississippi that led the charge for electric cooperatives to bring power to rural America in the 1930s, Presley said. At the time, for-profit power companies knew they couldn't make money by serving customers in low-density population centers.

The first electric co-op in the country was in Alcorn County, he noted, with communities in Pontotoc County, Prentiss County and Tupelo following.

But Turner said there are several key differences between the 1930s and now.

One of those is funding. At the time, Congress was "funneling money" into Tennessee Valley Authority and other projects to generate cheap electricity.

The Federal Communications Commission has announced a plan to pour $2 billion over the next 10 years into rural broadband as part of its Connect America program, but Turner fears it won't be enough money to cover individual cooperatives - especially if private internet companies receive some of the funding as well.

At best, Turner said, 4-County would likely only cover 10 percent of the costs with federal grants.

"That Connect America is a huge pool but it's everybody in the country fighting for a piece of it," he said.

Another key difference was that co-op members had to pay up front, Turner explained.

"It wasn't that we put the lines up and hoped people took the electric service," he said. "People had to invest in the cooperative. It wasn't just the membership. People had to put up $10,000 or whatever. ... You did it over time -- you didn't have to come up with that money right away -- but it wasn't just, 'Hey, all of a sudden we put up 5,000 miles worth of line.'"

Even in the '30s, he said, the co-ops started providing service in more populated areas. 4-County started with 730 members - in Starkville.

"That's where the density was," Turner said. "It wasn't the farms. ... It was 25 years later that we're still working in Choctaw County getting lines up."

The same build-out strategy would be used with broadband, he said.

Bob and Suzie Manning, who attended Presley's meeting Thursday, said they want 4-County to offer them a better option than their current DSL internet connection. Bob plans to distribute a petition, provided by Presley, through his neighborhood homeowner association. Both he and Suzie said they feel the co-op has been too slow in studying the issue.

"My impression is they're hem-hawing about it," Bob Manning said.

But what Manning called hem-hawing, Turner called taking a cautious due to the $115 million on the line.

The future of internet

Presley stressed that high-speed internet will increasingly become a necessity for rural Americans and senior citizens in the coming decades. Connectivity affects everything from "smart appliances" to health care, as it becomes increasingly possible for medical devices to send doctors data and for health professionals to visit with patients online.

"We are kidding ourselves if we do not believe (lack of quality internet) is leading to why we see the brain drain in Mississippi," Presley also pointed out.

Turner admitted most of the rural residents who responded to 4-County's marketing study were 45 or older, but he said that just tells them they have time to explore the issue.

"Broadband is definitely a part of (living the quality of life you choose). We understand that and ... we want to help figure that out," he said.

Presley said if 4-County makes a good-faith effort to explore broadband and decides to stick only with electricity, then he "won't say a word." But he feels there are things they could do to speed up the process, such as scheduling a vote for members to amend its charter.

Turner said if 4-County does break into broadband, it will likely not look like the co-op looks now. It would be a partnership with a private internet company, or 4-County would form a separate LLC to handle the broadband side of the company. Its priority will always be electric power.

Despite the risks, he said, he hopes 4-County can offer broadband.

"I think most people in our office honestly hope so because we do understand how transformative ... it can be," Turner said.

He estimated the board will come to a decision about whether to invest in broadband within the next year.

"If you could show me a true co-op success story in the country, I'd be happy to tout it but there's not one," he said. "There are ones that have worked well enough, but ... every one of those are doing it in small chunks."