Very hard to watch. It's honestly sad to see people act this way in our city. Absolutely ridiculous. pic.twitter.com/HlJSchwh4K 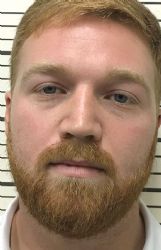 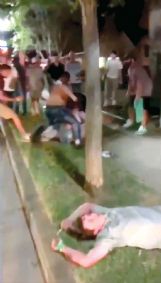 A screenshot from a video posted on social media shows a weekend brawl in front of St. Joseph Catholic Church in Starkville. A D'Iberville man has been arrested for his part in the fight.
Photo by: Courtesy image

A Mississippi State University student was arrested on a simple assault warrant Monday for his participation in a brawl outside St. Joseph Catholic Church early Sunday morning on University Drive, according to a tweet from the Starkville Police Department.

Nathan Cvitanovich, 22 -- who MSU officials confirmed is a junior from D'Iberville -- was one of dozens of college-age individuals in a Cotton District fistfight that was caught on video that has received thousands of views on social media. The original post has been removed, but the video is still publicly available on a different Twitter account.

In the video, a man can be seen yelling, taking his shirt off, throwing multiple people to the ground and punching some of them repeatedly.

Others in the video are seen throwing punches, pushing and shoving. Several people can be seen lying on the ground in the churchyard during the melee.

First responder vehicles can be seen in the background.

SPD Public Information Officer Brandon Lovelady did not provide the call and response times for the incident by press time today. The Dispatch has submitted public records requests for the incident report and arrest affidavits.

The incident is still under active investigation, and SPD cannot disclose if there were any injuries, Lovelady said.