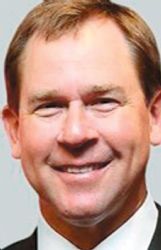 It was hot Saturday and it was still hot Monday, and the subject is not the weather.

A day after Mississippi State Athletic Director John Cohen took to Twitter to apologize to fans for problems with concessions at Davis Wade Stadium for Saturday's football home opener versus Southern Mississippi, Cohen was still biting his tongue Monday during his visit to the Starkville Rotary Club.

Cohen used the Rotary appearance to tout the success of his athletic program over the past year, mentioning the concession problem only briefly at the end of his talk.

"Saturday was not what we wanted it to be in terms of concessions," Cohen told his audience. "We had some very, very lengthy, good, frank discussions about concessions this past week, and I think you're going to see drastic improvements in that."

Cohen was only slightly more inclined to talk about the situation after the luncheon had ended.

"I just don't want to discuss this," he said. "We have too many things going on with (Aramark) right now. That's why I made the statement (Sunday) apologizing to our fans. I'd rather just stay with my statement."

Cohen did say the problem was evident almost immediately as more than 55,143 fans attended the game where temperatures reached 96 degrees for the 2:30 p.m. kickoff.

"Oh yeah," Cohen said. "People in our administration threw off their coats and ties and started serving people. I mean, it's something that we need to get fixed."

"Yesterday's unpreparedness by concessionaire @aramark was unacceptable," he Tweeted. "Assured this last week that all stands would be fully operational. Met this a.m. to convey deep disappointment. Aramark guaranteed will not happen again. Our sincerest apologies to @HailState Family -- You deserve better."

Aramark officials did not respond to questions about game day concessions by press time.

Aramark has had the contract for providing concessions at Mississippi State events since 2010. The company manages the university's dining services under a separate agreement.

Salter said for the first eight years of the contract, MSU received a guaranteed payment. Since then, MSU and Aramark share profits/losses with MSU paying Aramark a management fee.

Last year, MSU drastically reduced the cost of concessions -- slashing hot dog prices, for example, from $5 to $2 and bottled water from $4 to $2.

The concessions contract expires next June, Salter said, adding, "There are a few other vendors in this space that will receive a chance to bid on the next concessions RFP (request for proposals)."

Asked Monday if there were still issues that needed to be resolved, Cohen was succinct.