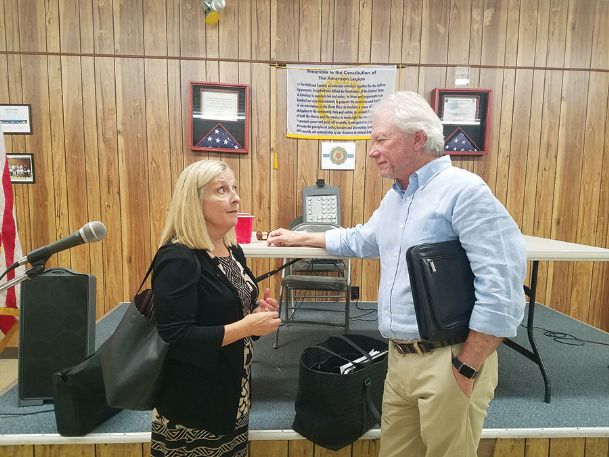 Ellen Weaver Hartman, left, and Jim Hemphill get to know each other after Tuesday's American Legion Post 13 meeting in Starkville. Hartman's and Hemphill's fathers were in the same prisoner of war camp in Poland during World War II. Photo by: Tess Vrbin/Dispatch Staff 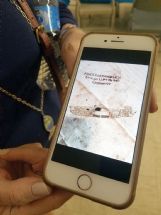 Pam Hemphill displays a photo of an airplane that her father-in-law, James Hemphill Jr., embroidered on a piece of his parachute during his 15 months as a prisoner of war in World War II.
Photo by: Tess Vrbin/Dispatch Staff

Ellen Weaver Hartman wouldn't exist today if a man from Louisiana hadn't picked up and carried her father, whose ankle was broken, during their forced 600-mile march across Europe as Allied prisoners of war during World War II.

If a POW could not keep up, the others would hear a single gunshot from a German soldier soon after they had marched past their comrade, unless someone picked him up first, Hartman told the American Legion Post 13, the local chapter of the nation's largest veterans service organization, at its monthly meeting Tuesday.

Hartman is a Starkville native, a University of Mississippi graduate and a public relations professional living in Atlanta. She has spent three years researching her father, Joseph D. Weaver's, service in WWII. Weaver died in 1996.

Weaver was an airman in the 554th Bomb Squadron, 386th Bomb Group, 8th Air Force and 9th Air Force, and he was shot down and captured on Aug. 6, 1944 in Normandy, France. He was one of thousands of POWs kept in a camp in Poland and forced to march to Germany for 86 days in the little-known event called The Death March, The Black March or The Forgotten March.

WWII veterans often did not tell their children about their wartime experiences. Weaver revealed a few things, such as the scar on his back, his frostbitten feet and stories about one of the POW camp's guards, "a giant of a man" who tormented the prisoners, Hartman said.

She began her research when she came across a book about The Death March by Laura Edge, a Michigan resident and fellow daughter of a WWII POW. A 2017 Atlanta Journal-Constitution article profiled Hartman and Edge's travels to Europe to research their fathers' imprisonment and retrace their steps on the march.

Hartman emphasized the British and American airmen imprisoned in the Stalag Luft IV camp were practically children, mostly between the ages of 18 and 20, and the "old men" of the group were 24. They did not have sufficient clothing for the Death March when it began in February 1945 in subzero temperatures. They also did not have access to fresh water or reliable food sources, so they hunted small animals and scrounged for vegetables in farmers' fields.

"Cigarettes, although they probably killed them in their 70s, kept them alive on this march because they traded them for the farmers' food," Hartman said.

The prisoners marched to a camp in Gudow, Germany, that was liberated by British forces on May 2, 1945. After his return home, Weaver attended Mississippi State University and later owned an Amoco gas station on Highway 12.

He struggled for a while with nightmares of the war and even put his fist through a wall one night, but he hated conflict and lived by a "kill them with kindness" mentality, Hartman said.

"Sometimes service people come back and they're still ready to fight, but for my dad, it was the opposite effect," Hartman said. "He had no patience for the mistreatment of any living being."

According to the Atlanta Journal-Constitution, the Amoco gas station was bombed, most likely by the Ku Klux Klan, after Weaver allowed a group of Freedom Riders to use a white restroom in the 1950s.

Hartman has previously shared her research at the posts in Ackerman and Savannah, Georgia. She learned at her presentation in Ackerman that her grandfather, Joseph F. Weaver, a World War I veteran, co-founded and attended the first meeting of the American Legion in Paris in 1919. He founded Choctaw County's American Legion post after he returned home to Ackerman.

Hartman said her ongoing research is a "great hobby" that has created a network of other WWII researchers and children of POWs, she said.

Starkville resident Jim Hemphill knew Weaver several decades ago but did not know Hartman, and he found out Sunday upon learning about the presentation that their fathers were in the same POW camp and both part of The Death March, he said.

Hemphill's father, James Hemphill Jr., was shot down and captured in Austria and spent 15 months as a POW. Even so, he later served two years in the Korean War.

James Hemphill Jr., a Jackson native, was diagnosed with post-traumatic stress disorder when he was in his 50s and the illness was just starting to become known. Only then did he start talking about his experiences as a POW, including being crowded into the hull of a ship in the Baltic Sea for three days, Jim Hemphill said.

"It's a wonder any of them ever lived through it, but I'm glad they did because I wouldn't be here," he said.

Hartman brought four family members to her presentation, and she said her goal is to inspire others to pursue the stories in their families, she said.