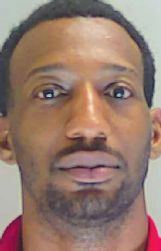 A Philadelphia, Mississippi man is in custody at Lowndes County Adult Detention Center after state troopers discovered him with a missing 15-year-old who they believe to have been a sex trafficking victim from Georgia.

Troopers arrested Emanual Terelle Moore, 32, on Sept. 2 on Highway 45 Alternate and charged him with kidnapping and misdemeanor contributing to the delinquency of a minor. According to information Mississippi Highway Patrol Public Information Officer Sgt. Derrick Beckom provided The Dispatch, a trooper discovered Moore, the victim and another man stopped on the side of the highway due to a disabled vehicle and stopped to help them.

While talking with Moore, the trooper "recognized indicators the adult males were a high risk threat" to the child and separated her from the adults, according to the information Beckom provided. After speaking with the child, the trooper learned she was reported missing out of Georgia and was a victim of commercial sexual exploitation. Moore had been arrested in Georgia for statutory rape of the child and was out on bond.

The other adult in the vehicle was also arrested and later released after further investigation by Mississippi Bureau of Investigation, Beckom said. It is unclear whether Moore will face federal charges in addition to charges from MHP.