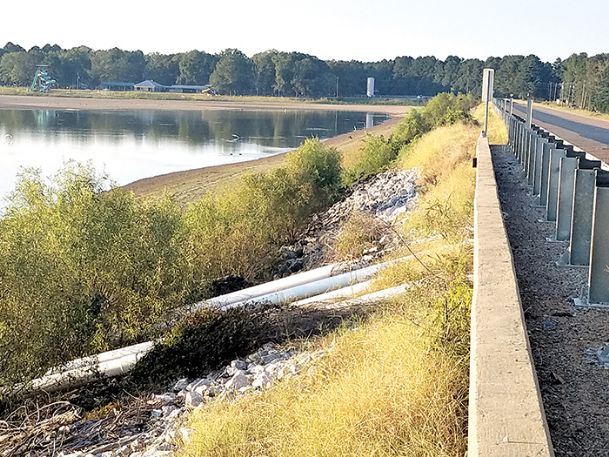 The Oktibbeha County Lake Dam is nearly empty in places. The water level has been deliberately low since 2016, when the Mississippi Department of Environmental Quality inspected the dam and found the levee to be in serious need of repair. Photo by: Tess Vrbin/Dispatch Staff

The waters of Oktibbeha County Lake Dam could pose danger to nearby residents if the levee is not replaced, according to county officials.

If it breaks, 17,500 acres of nearby land would flood to some extent, and about 250 people would have to evacuate at least 112 households, county emergency management director Kristen Campanella said.

The lake is in the northeastern portion of the county, west of County Lake Road, which includes the bridge on the levee. It was built in the 1960s and holds about 3,406 acre feet, or more than 148 million cubic feet, of water at normal operating conditions. Its full capacity is more than 454 million cubic feet over 935 acres.

The county has minimized pressure on the levee by limiting the amount of water in the dam since 2016, when a Missouri Department of Environmental Quality inspection confirmed the levee needed repairs, Oktibbeha County District 3 Supervisor Marvell Howard said. The initial goal was to keep the water at least five feet below a normal level, but parts of the lake are currently drained dry.

Herring and Willy Weddle, a field representative for Kelly's office, visited the lake and met with county leaders on Sept. 10 to discuss plans and funding for replacing the levee, emergency spillway and floodgate valve. They met with Campanella, Howard, County Engineer Clyde Pritchard and County Administrator Emily Garrard.

The offices of U.S. Rep. Michael Guest, 3rd District, and U.S. Sen. Roger Wicker, both Republicans, have also been monitoring the situation and offered support, Howard said. The lake straddles the line between the 1st and 3rd Congressional Districts, prompting Guest and Kelly's mutual interest in replacing the levee.

Safety is the main concern for all involved, Weddle said.

"School buses cross that levee twice a day carrying children to and from school," he said. "We saw underneath that bridge that there is a very imminent danger there, certainly for the total population that crosses it, but especially for our children."

The entire project could cost up to $8 million, including replacing part of County Lake Road and constructing a detour, Howard said.

The county is considering three federal grant options, but they are competitive and could take a while to obtain, so it is not guaranteed that the county will have the funds before the levee breaches, Campanella said.

Meanwhile, the limited amount of water in the dammed area has a negative impact on economic development near the lake, Howard said. The Wet N Wild water park at Kampgrounds of America on the lake had to close after the water level went down in 2016, he said.

"There was also a significant amount of development taking place on the south end of the lake because a lot of people wanted waterfront property and wanted to be along the water," Howard said. "Now that has slowed down tremendously because there's no water."

The lack of water does not eliminate the problem, Campanella said.

"Even though the lake has been drained down, it doesn't take long to fill back up when we have steady, heavy rainfall in short periods of time," she said. "With hurricane season at its peak and not being over until November, we could see activity that leads to set up like that at any time."

The amount of support for the project will hopefully lead the county to a funding source "before something tragic happens," she said.