Spears: 'Fire is continuing to grow' at CMSD 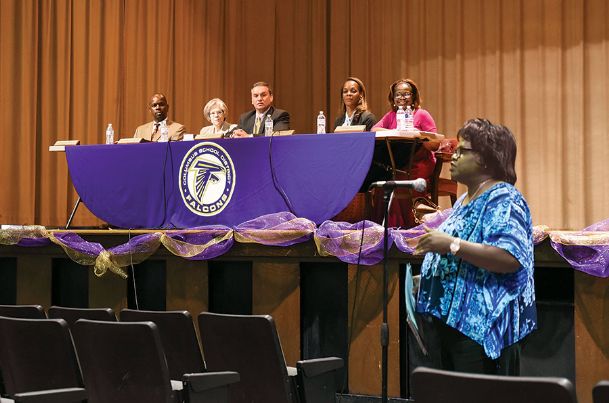 At Columbus Municipal School District, board president Jason Spears said "the fire is continuing to grow."

Community volunteerism and parent involvement are up, teacher turnover is slowing and campuses are safer than they were a year ago, according to school officials.

In fact, during a 90-minute public forum Tuesday night in the Joe Cook Elementary School auditorium, board members and Superintendent Cherie Labat reported most everything at CMSD is better than it was a year ago.

"It has been an amazing change over the past year, and I've been honored to be a part of it," board member Josie Shumake told the crowd of roughly 100. "We're definitely headed in the right direction. We're not where we want to be, but we're going to get there. It's going to take time."

Audience members, either by submitting written questions or speaking at an open mic, ran the board and Labat through a smattering of subjects ranging from how students are being prepared for end-of-year state benchmark exams and the workforce to the effectiveness of the district's stricter safety measures, such as adding metal detectors at some campuses and tightening the dress code.

The first written question, though, frankly asked how CMSD leaders were "raising students' attitudes from accepting mediocrity to excelling."

"We believe students will rise to our expectations, and we've worked diligently with teachers and administrators to raise those expectations," Labat said. "... We also believe that rewarding success, as it relates to behavior, attendance and achievement, has also improved our students' mentality. I don't believe our students ever had the mindset of being mediocre. I just think they needed the challenge, the resources and the environment to excel."

Overall, Labat credited an improved "culture" at CMSD -- which she defined as how safe students and employees felt at school, how they valued themselves and how much they felt others valued them -- with a district turnaround that has restored both morale and public confidence in the district.

An annual public forum such as Tuesday's, Spears said, helps build stronger partnerships with all district stakeholders, which he believes will also show up in teacher performance and student achievement. To do that, though, the administration, board and community members must honestly tackle problems still in front of them.

"We are all about facing the challenges that are existing that we may have a blind spot to," he said. "But to go forward, I think the key is to acknowledge those challenges and work together so we can build and grow."

Becoming a B or A district

One such challenge is raising CMSD's state accountability rating from the D it's held for the last several years.

Despite gradual growth in state benchmark performance -- on which the A-F scale ratings are largely based -- CMSD showed no growth in its overall status when Mississippi Department of Education made statewide ratings public last week. And while one campus, Stokes Beard Elementary, rose from an F to a B, Sale Elementary and Columbus Middle School dropped to Fs.

Labat highlighted an across-the-board increase in coaching intervention for English-Language Arts and math instruction, as well as the addition of a high school counselor that focused on raising attendance rates for students.

Specifically speaking to preparation for young children to pass the third grade reading exam -- which is required by the state to advance to fourth grade -- Labat advised parents to both read to their children and encourage them to read independently.

"You have to foster a love for reading," she said. "You have to tell them it's important, and let it be natural. Let them pick a book they want to read. Surround your home with books. The value has to be there in the home that reading is important."

Beyond test scores and accountability ratings, Labat also highlighted the district's partnerships with East Mississippi Community College and The Golden Triangle Development LINK to promote workforce readiness among high school students. All seniors take the WorkKeys exam, which measures workforce skills and aptitudes, and a staff member will start in October specifically teaching soft skills -- interviewing, putting together a resume, etc. -- at the high school.

One written question pressed Spears on why he sat as the board's president while he sent his children to private school.

Spears, amid his second four-year term on the board, has one school-age child who attends Heritage Academy.

Before Spears answered for himself, he deferred to Labat and fellow board members, all of whom adamantly defended Spears' leadership and work on the board, as well as his passion for the school district's success and efforts to increase CMSD's public transparency.

Board member Frederick Sparks, echoing his colleagues, called Spears a "great asset" to the community as a whole.

"No one on this board is here as a representative of their own personal household," Sparks said. "We're here for the community.

Spears denied what he called a "narrative" that he refuses to send his children to CMSD. He did not answer why his school-age child didn't attend already.

"Multiple trustees have done the same as me," he said. "When it comes to my children in the school system ... it has been stated incorrectly by many people who are keeping (this) narrative going that I've said my children will never attend here. That's never been farther from the truth."