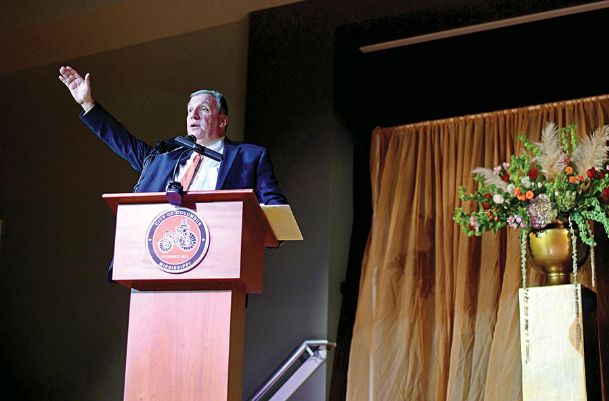 Author John Feinstein addresses attendees during the Welty Gala Friday night at the Trotter Convention Center. Feinstein spoke about his career and lessons learned from coaches and players over the years. Photo by: Jennifer Mosbrucker/Dispatch Staff

John Feinstein answers questions from the audience after giving a speech during the Welty Gala Friday night at the Trotter Convention Center. The Welty Gala is an annual fundraising event hosted by Mississippi University for Women.
Photo by: Jennifer Mosbrucker/Dispatch Staff

Of all the keynote speakers during the 31 years of the Eudora Welty Symposium, John Feinstein faced a unique challenge.

Over the years, the keynote speaker at the Eudora Welty Gala has represented a wide variety of genres.

Friday evening at the Trotter Center, Feinstein became the first sports writer to hold that distinction.

A sports writer and sport columnist at The Washington Post since 1980 and author of 35 books, all of them sports-related, Feinstein found common ground with an audience whose interest in sports range from zero to fanatic and all points in between, relying on humor and the stories of the real people behind the games he's covered for 40 years.

"You don't have to be rich and famous to have a story to tell," Feinstein said. "I've written a lot about athletes who aren't rich or famous -- my book on the Army-Navy (football) rivalry, the Patriot League (college basketball). I just finished a book called 'The Back Roads to March,' I spent a whole season just hanging out with players and coaches on teams who won't be on ESPN. Some of the best stories aren't about people whose names you recognize."

To be sure, in his long career, Feinstein has gotten to know many sports figures who are household names. But more often than not, it's been the deeper, more personal, aspect of those sports celebrities that have been most compelling.

One of those stories came from the late Dean Smith, the legendary basketball coach at North Carolina.

"In 1981, I did a profile on Dean for the Post," Feinstein said. "Dean never wanted anybody to write about him. It was always, 'Write about the players. Write about the players' with him. I finally convinced him to give me some time and he also agreed to give me the names and phone numbers of some of the people who were important in his life. One of them was his minister at Binkley Baptist Church in Chapel Hill, a man named Robert Seymour, and I went to interview him.

"He told me a story that hadn't been written about Dean at that point," he continued. "When Dean was an assistant at North Carolina in 1958, he walked into a segregated restaurant in Chapel Hill with a black member of the church and basically threatened the management of the restaurant not to serve them. That helped desegregate Chapel Hill restaurants."

Feinstein was surprised by Smith's reaction when later he asked the coach to tell him more about that moment.

"He said, 'Who told you that?' And I told him it was Rev. Seymour," Feinstein recalled. "He said he wished (Seymour) hadn't told me that. I said, 'Dean, you should be proud of something like that.' He said, and I'll never forget it, 'You should never be proud of doing the right thing. You should just do it.'

"It's one of the greatest lines I've ever heard in my life from anybody," Feinstein added. "I've always tried to remember that."

Feinstein noted that sometimes sports can be transcendental, with impacts that go far beyond a respective game.

As a lifelong sports fan and with more than 40 years covering sports, the most important impact of them all is clear to Feinstein.

"I think Title IX was the most important piece of legislation of my lifetime," said Feinstein of the 1972 legislation requires colleges and universities to provide equal access to sports programs and athletic scholarships to women.

"It didn't just change athletics," he said. "It changed the world. It changed the way my two daughters have grown up and daughters everywhere. When I was a kid, there were no athletic scholarships for women. We had a volleyball team at my high school. It was volleyball and cheerleading. That was it.

"Now, that's all changed," he added. "Women have opportunities they never had before and it's not just in sports. Title IX opened the doors in other areas, too. You'll find women today in all sort of fields they didn't have access to 40, 50 years ago. That's part of the Title IX story, too."