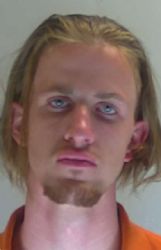 A high-speed chase that ran several motorists off the road in east Lowndes County Friday evening resulted in the arrest of a man for felony charges of auto theft and fleeing from law enforcement.

Gregory Cole Johnson, 23, of Steens was arrested by Lowndes County Sheriff Office deputies after the pursuit that began on Highway 12 in Steens and ended on Highway 50 after the tire sparks disabled the vehicle Johnson was driving.

Deputies were dispatched to 8238 Highway 12 E. in Steens when a customer at the Old Country Store reported his vehicle, which he had left running, had been taken. As the LCSO deputy was taking the report, a vehicle passed the location matched the description of the stolen vehicle and LCSO deputies, after confirming the identity of the car, began the pursuit.

LCSO said speeds exceeded 80 mph during the pursuit and several cars were run off the road as Johnson fled.

Johnson was charged with two felonies -- felony taking of a motor vehicle and fleeing from law enforcement.

Johnson is in custody at Lowndes County Adult Detention Center with a $8,000 bond.