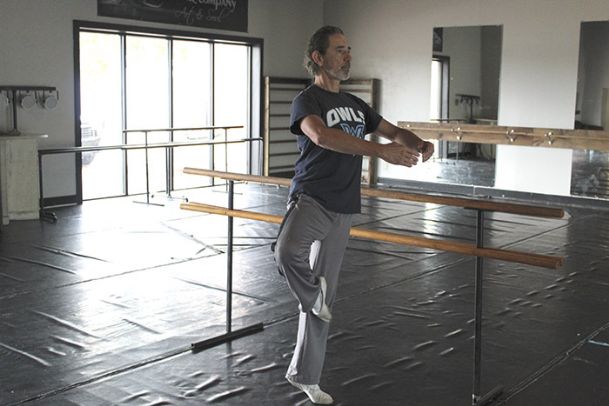 Dolan Shoemaker stretches in a studio at Wherehouse Dance Company in Columbus, where he serves as ballet master. He started dancing at age 19, and went on to dance professionally with Jackson-based Ballet Mississippi. At 57, he teaches intermediate and advanced classes at Wherehouse. Photo by: Zack Plair/Dispatch Staff

After Dolan Shoemaker's first ballet performance as a student at the Mississippi University for Women, his father's feedback was succinct.

"That looks a lot harder than I thought it would," Shoemaker recalls him saying.

Shoemaker's parents had driven from Decatur to support his new endeavor, and he took those words as high praise from his blue-collar father --a farmer and an auto body repair instructor at East Central Mississippi Community College -- who had been particularly impressed with how proficiently Shoemaker lifted the ballerinas during the dances.

"When he said that, I told him, 'It's like holding a 100-pound sack of horse feed over your head, smiling and walking off the stage like a prince,'" Shoemaker said. "He never missed a performance."

Shoemaker, 57, built an impressive professional ballet resume before returning for good to Columbus about five years ago. Now, he teaches about 70 intermediate or advanced dance students as ballet master for Wherehouse Dance Company in the Brickerton Shopping Center, and while his peak dancing days may be behind him, he still finds time to perform with a group based in New Albany.

"I'm still on that stage," Shoemaker said. "Instead of being the prince, I'm the king sitting on the throne watching the young guys do the hard turns, leaps and lifts. ... I can still do it, though."

Finding ballet was a sort of happy accident for Shoemaker. Toiling away in 1982 at Mississippi State University as a computer science major -- which, he said, he hated -- he signed up for a dance class on campus just for fun. The teacher for that class, however, saw potential in his footwork and soon Shoemaker earned a scholarship to study ballet at MUW.

From there, Shoemaker studied on scholarship at the Pittsburgh Ballet Theatre before starting his professional career with the Ballet Mississippi company in Jackson, with which he performed for six years across the Southeast. He's performed as a guest artist with companies from Alabama, Louisiana, Tennessee and Texas, and he's been assistant production manager three times for international ballet competitions in Jackson.

During his career, Shoemaker has studied with dancers from England, Russia, Cuba and a half-dozen other countries. His favorite places to perform, however, are in South Louisiana.

"I love the Cajuns," he said. "They always had great receptions with good food and usually lots of wine. Just great people."

Shoemaker started teaching in 1992 when he cofounded the Mississippi Metropolitan Ballet in Madison. Since returning to Columbus, one of his primary goals is removing the stigma from boys learning to dance -- something that kept him from even trying until he was 19. He teaches a boys' class at Wherehouse each week, and the ones who give it a try tend to quickly see its value, he said.

"It's tough to recruit because there is such a stereotype," Shoemaker said. "But anything you would hear from a football, basketball or baseball coach about discipline or teamwork, the same applies to ballet. It requires discipline because it's so physical, and you have to trust your teammates because if one domino falls, they all fall."

The audience that has been most receptive, he said, is soccer players.

"One boy, his soccer game has improved, because his footwork has gotten better," Shoemaker said.

For Shoemaker, dance, at long last, has brought him back to where he believes he belongs. It's actually his third time living in Columbus -- he came back briefly in the '90s and taught at MUW -- but this time, he's here for good. Wherehouse, he said, is the "most nurturing environment" in which he has ever taught and his life, generally, is working out pretty well.