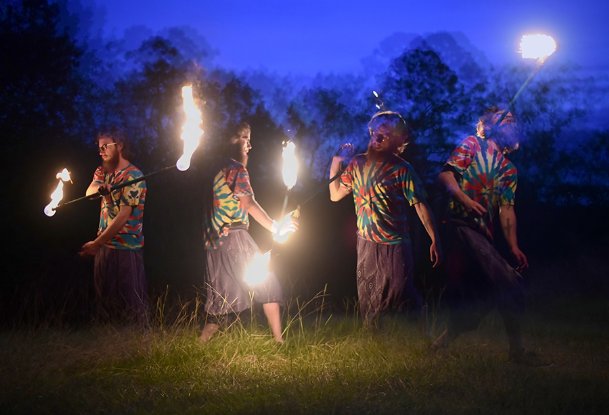 In this multiple exposure image, Danny Blackman demonstrates his fire spinning skills on Sunday evening at Cedarhill Animal Sanctuary in Caledonia. Blackman learned about fire performing from a friend while living in Chattanooga, Tennessee. He now performs in his free time when he is not working as the primary caretaker for exotic animals at Cedarhill Animal Sanctuary. Photo by: Jennifer Mosbrucker/Dispatch Staff

Danny Blackman spins a contact staff above his head Sunday evening at Cedarhill Animal Sanctuary in Caledonia. When Blackman first entered the flow arts community he built a new support network that extended beyond fire performing. "They became a family I never had before," Blackman said.
Photo by: Jennifer Mosbrucker/Dispatch Staff

Danny Blackman, pictured in this double exposure, has been fire performing for about three years. After working an IT job, Blackman decided he want to switch career paths and began working at an animal shelter. His love for animals grew and he now works as the primary caretaker for exotic animals at Cedarhill Animal Sanctuary while fire performing in his spare time.
Photo by: Jennifer Mosbrucker/Dispatch Staff

A "flow zone" is a mental state where nothing matters except what you're doing right then.

"Every breath and movement is in sync and you're just dancing," Danny Blackman explained. "You feel everything you're doing, and it just feels right."

Since walking down a cliff in San Diego overlooking the Pacific Ocean he had planned to jump from in a moment of despair a few years ago, Blackman has pieced together a new life seemingly one flow zone at a time. And while he describes his new "highs" as adequately euphoric, it's been quite some time since they've involved drugs.

Blackman, 23, spends his days tending to his "babies" -- four lions, 11 tigers and two bobcats -- as the primary exotic animal caretaker at Cedarhill Animal Sanctuary near Caledonia.

As unconventional as Blackman's job may be, his hobby is arguably more so.

About twice a week, outside his on-site home at Cedarhill, Blackman turns on some music and spends a couple of hours in a flow zone "spinning fire." That is to say he takes a roughly four-foot "contact staff," lights kerosene-dipped kevlar wicks on each end and essentially dances with the staff, either rolling it over his body or manipulating it with his hands.

"It's a release," he said. "It's really like therapy at this point."

Blackman's paths to Cedarhill and to fire spinning were anything but straight lines. He dropped out of high school in Utah at 17 and earned his GED. Somehow, he still landed a good-paying information technology job at 18 and worked there a while before moving to San Diego.

There, Blackman said, he found a drug and party culture that ultimately drove him to that Pacific cliff to contemplate "ending it all." His father, who was living in Chattanooga, Tennessee, called him just in time.

"He was driving down the road and said he suddenly felt like he needed to pull over and call me and ask me what's going on," Blackman recalled. "I was honest with him. ... So, instead of going into the ocean, I went to Chattanooga."

Not long after arriving there, Blackman joined a tribe of freelance circus-style performers who let him in because he could juggle -- he started when he was 12 with props his father had gotten him from a Blue Man Group show. Soon, Blackman was hanging out every Sunday with his tribe learning to spin fire.

"The first time I took the staff, it was absolute fear and excitement," he said. "It's scary and intense. You have to be in the moment. ... It's an absolute rush in every way."

Blackman quickly became good enough to perform at weddings, birthdays, summer camps and block parties in the Chattanooga area, and ultimately co-founded a fire troop called the "Ethereal Embers," with which he still occasionally travels and performs under the moniker "Dementional Danny."

He wanted to make fire-spinning a career, but that door never really opened. Another one did.

Blackman made ends meet working for the Humane Society in Chattanooga, where his boss had North Mississippi ties and happened to know some folks at Cedarhill.

At his boss' recommendation, Cedarhill gave Blackman a weeklong trial run before hiring him last fall to take care of the exotic cats -- all of which are rescued and not exposed to public visitors.

The cats definitely, "give me a run for my money, but they're good kids," Blackman said.

"Most people with this job have a biology degree or an animal welfare degree, so I'm extremely lucky," Blackman said. "Am I good at this? Yes. I'm also a hard worker, but I've got a lot to learn. ... I love the daily challenges of this job and I definitely want to stay.

"Everything that can happen will happen. So you just love it and rock it," he added. "... I've gotten more blessings than a man deserves in this life. I'm thankful for every one of them."

Blackman said his Cedarhill "family" knows his story and they also "love and support" his side talent. He's even picked up one fan he didn't expect.

"I had an opportunity to perform for everybody here, and as I finished and burned out, Zeus (the biggest and oldest lion at Cedarhill) started gruffing," he said. "I felt like a lion was cheering for me. That was pretty special."