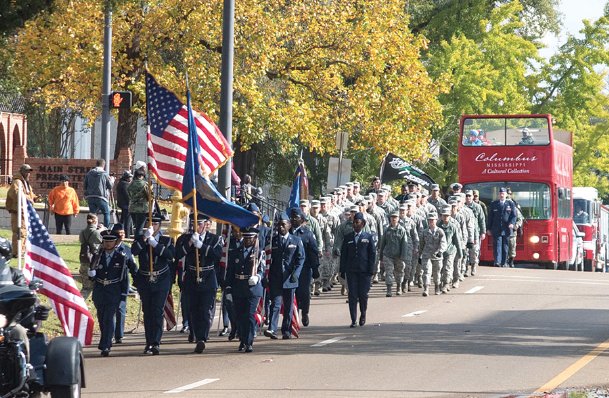 Citizens march in downtown Columbus for the annual Veterans Day parade in 2018 in this Dispatch file photo. Both Columbus and Starkville will host parades again on Saturday in honor of veterans and their families throughout the Golden Triangle community. Photo by: Dispatch file photo

On Saturday, both Columbus and Starkville will host Veterans Day parades in honor of community members, past and present, who have served in the armed forces.

In Columbus, multiple organizations, including the American Legion and Columbus Air Force Base, are putting on the parade from Columbus Police Department at the Municipal Complex down Main Street to the Lowndes County Courthouse.

"We have in this county over 10,000 veterans, men and women, who have answered the call to our country," said Columbus American Legion post commander Calvin Boswell. "This is something to let those members know the people that have (made) that sacrifice, let them know that there are still veterans in the community that are very active and here to help and do whatever needs to be done to bring awareness to veteran issues, veterans and their families."

The ceremony will include special guest CAFB commander Col. Samantha Weeks, along with other guest speakers and a moment of silence. Alice Lancaster, a member of Daughters of the American Revolution, said her organization will present flowers to the war memorials at the courthouse. Columbus High School ROTC will present the colors.

"I just think it's everyone's responsibility to honor our past with our past and present veterans that served our country," Lancaster said. "We appreciate everything that they have done for us and they do for us. It's a grand way to involve the whole community to come out and just get involved in singing the National Anthem and saying the Pledge of Allegiance together. I think it's an excellent way to honor these men and ladies."

Line-up is at 9 a.m. at the Municipal Complex. The parade begins at 10, marching west down Main Street, turning right at the YMCA on Sixth Street North, left on Second Avenue and ending at the courthouse. The ceremony will begin at 11 a.m. and include a flyover by CAFB flyers at 11:30.

"I'd like to thank each and every veteran member and their families, the spouses that have stood by their side and supported the veterans, male and female, of accomplishing their mission," Boswell said. "It's one of the most honorable things that could ever be done and I'm honored to be in the midst of it."

Starkville's parade begins at 10 a.m. at the intersection of Courthouse and Main Street and will end at the Oktibbeha County Courthouse where there will be a program.

This is the second year local business KMG Creations has sponsored the event, said owner and parade organizer Kayla Gilmore.

"(Last year's) was the first Veterans Day parade in the history of Starkville," Gilmore said.

This year's parade will feature a flag folding ceremony by the Air Force ROTC at Mississippi State University, presentation of the colors by Starkville High School ROTC and multiple music performances, including by SHS Singers and the Controllers 4-H Choir. Grand marshal will be Capt. Timothy Bailey of the 2-114th Field Artillery in the Mississippi National Guard.

Gilmore, whose older brother is also retired from the National Guard, said Bailey and his fellow service men and women from the 114th have recently returned from deployment, and that this parade will also serve as a sort of welcome home for them. Since other veterans from the Starkville community will be present, she hopes it's an opportunity for those who have served to mingle and get to know each other. She pointed out multiple public officials in Starkville, including Mayor Lynn Spruill and Starkville Police Chief Frank Nichols, are also veterans.

"I feel that it's important that the veterans be heard," she said.

She added she's had plenty of support organizing the parade from local businesses and city officials.

"Clearly you want your community to be involved in the service that veterans provide to us," she said. "... It's a way to not only say thank you but it's also a way to encourage others to ... recognize the importance of their involvement and engagement in the community."