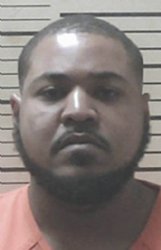 A Starkville man was arrested Saturday for "threatening to harm the general public, law enforcement officers, and citizens of the City of Starkville" on social media, according to a Starkville Police Department press release Wednesday morning.

Darron Grayer, 28, posted a Facebook Live video Friday of himself walking down Highway 182, wearing a black bandana over his face and referring to Starkville as "my (expletive) city."

"If I have to go around slapping every (expletive) in this (expletive), I will," he said. "If I have to start letting bodies drop, I will. If I have to roll up to your momma's crib and start sending shots out, I will."

In the video, Grayer also refers to himself as "King D" and repeatedly declares "I'm back."

Grayer is charged with retaliation against a public servant or witness.

"Whether posted for personal credibility, humor, out of anger, or any other reason, Chief R. Frank Nichols and the Starkville Police Department will not tolerate incidents such as these," the press release states.