Fighting for family: 16-year-old middleweight trains with grandfather in Columbus with eyes on 2024 Olympics 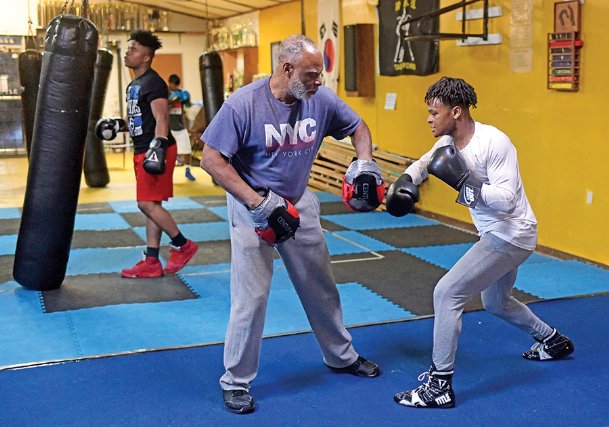 Oliver Miller puts on punching mitts to work with his grandson Zion Reed, 16, during practice on Thursday at Miller's Boxing and Taekwondo Gym in Columbus. Reed has been training at his grandfather's gym for much of his life. Photo by: Jennifer Mosbrucker/Dispatch Staff 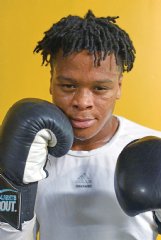 Zion Reed pauses for a portrait between throwing jabs at the punching bag during practice on Thursday at Miller's Boxing and Taekwondo Gym in Columbus. On Oct. 18, Reed participated in a three-round practice bout at Trotter Convention Center, which he won.
Photo by: Jennifer Mosbrucker/Dispatch Staff

Dancing around on the mat softening the concrete gym floor, Zion Reed awaits his instructions.

"One-two," barks his grandfather and trainer, who is moving in front of Reed wearing punching mitts. Reed peppers the mitts with a quick left jab and a hard right.

"Eight times," responds the trainer, eliciting a fury of hard punches into the mitts while music plays in the background to help Reed keep his rhythm.

It's a typical Thursday evening for the 16-year-old New Hope High School student working out with Oliver Miller at his boxing gym on College Street -- at least typical of the last six months or so.

Not so long ago, Reed was a 220-pound linebacker for the New Hope football team. Now, he's a 160-pound middleweight with a 1-0 official record in the USA Boxing amateur ranks.

For most of his life, he's spent occasional days goofing off in his grandfather's gym watching his uncle, Shannon Miller, pursue a fighting career. Shannon died in 2018 of a heart attack at age 42, and now Reed is trying to honor his uncle's memory with a successful career of his own.

"I've just started getting serious over the last four or five months," Reed said. "I just remember seeing my uncle struggle and work so hard at it. ... Since he died, I'm to the point where I want to dedicate all my time to this."

So far, so good, according to his grandfather, a one-time Mississippi Gold Gloves winner whose more than 40 years as either a boxer or trainer helps him accurately spot talent when he sees it.

"He's training constantly," Oliver said. "He's an overachiever. He's the kind of fighter that if you forget a drill, he asks, 'Why didn't we do this drill or that drill?' A lot of times, I have to stop him from training.

"That's what you want though," he added. "You've got to be in shape in this because somebody's always out there waiting on you."

At Reed's football playing weight, he would have had to fight in the heavyweight division, something his 5-foot-9 frame would have struggled with against opponents over 6-feet who had several inches of reach advantage, as well. By trimming to 160 pounds -- something Reed did in less than three months -- he can use his strength and speed to pound middleweight fighters of more equitable dimensions.

His only sanctioned win came in Louisiana earlier this year. But in training bouts against other middleweights, most recently a win in a three-round fight in late October at Trotter Convention Center, Reed seems to be growing into his potential.

"I came out energized, got my jab going and just got a feel for (the opponent) at first," Reed recalled of his October practice fight. "Then he hit me, and everything changed."

Reed said the jarring lick helped him focus and bear down on the other fighter. He "whooped him" decisively in the second and third rounds, claiming the win on points.

"It was such a rush," Reed said. "It was everything I thought it would be. ... (If my uncle had seen it), he probably would have told me I could do more, but he would have been proud of me."

Reed's immediate goal is building punching power, which he said comes from the legs, so he can start scoring knockouts. Then he wants to box for Team USA in the 2024 Olympics and ultimately become a professional prize fighter.

Those goals are attainable, Oliver said. As his manager, he's working on getting Reed a few sanctioned bouts later this month in Mobile, Alabama. After that, he hopes to land sponsorships and start showcasing Reed's talents in sanctioned fights in Columbus.

"In my time training boxers, I've had about 20 or 30 serious fighters I would take out of town," Oliver said. "Zion is one of those guys, and he's hungry."

Admittedly, working with Reed also gives Oliver a taste of something he wants to hold onto as long as possible -- the memory of training his son Shannon in the same gym.

"It means a heck of a lot to me that (Reed is) family," Oliver said. "It makes me want to do everything I can for him."