Suspect in custody after Sunday stabbing 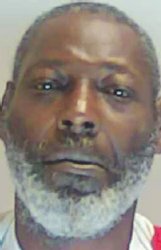 A Columbus man has been arrested for a reported stabbing Sunday afternoon.

Issac U. Brown, 56, was charged with aggravated assault, according to a Columbus Police Department press release. Brown is accused of stabbing another man on Peach Street during an argument.

Brown and the victim knew each other, Shelton added.

Brown is in custody at Lowndes County Adult Detention Center. His bond had not been set as of Monday afternoon.