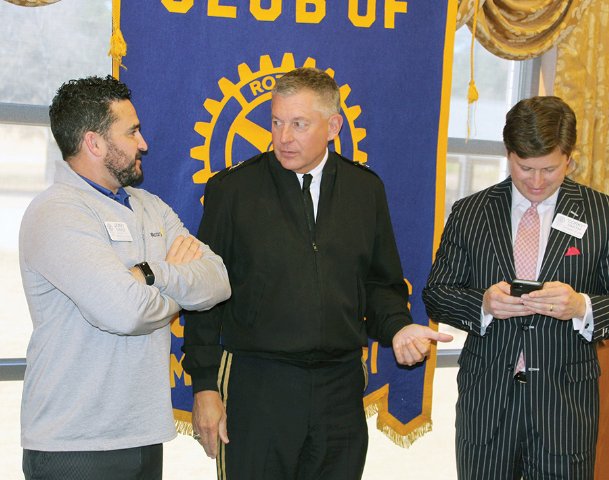 Major Gen. Janson Boyles, adjutant general for the Mississippi National Guard, visits with Columbus Rotarians Jimmy Parker, left, and Corky Smith, right, after speaking to the club Tuesday at Lion Hills Center. Boyles touted the operational readiness of the National Guard and its economic impact for the state. Photo by: Zack Plair/Dispatch Staff

Eighty-seven paratroopers landing in trees at Camp Shelby Army Base may sound like bad news.

"It got a lot of attention," Boyles told Columbus Rotary Club members at their weekly meeting Tuesday at Lion Hills Center.

The incident garnered national media exposure on Oct. 3, when a portion of the 4th Brigade Team 25th Infantry Division based out of Alaska parachuted into high winds above the Army National Guard and Reserve training base in Hattiesburg. Those jumpers were trying to hit a drop zone about the size of a football field, Boyles said, when they encountered a gust of wind at about 700 feet that "pushed them into the trees unexpectedly."

Despite the miscue, Boyles said, it drew attention to a first time training mission that proved to be a big deal for Mississippi. The active duty division of 650 troops offloaded equipment at the Port of Gulfport, spent three weeks training at Camp Shelby and then completed their training at Fort Polk, Louisiana. The purpose was readiness training for an overseas mission, Boyles said, but the impact for the state was evident.

"We're still looking at the numbers, but we think they spent a lot of money on food and restaurants in Hattiesburg," he said.

Boyles, a Mississippi State University graduate who Gov. Phil Bryant appointed adjutant general in 2016, lauded the National Guard as a major economic generator for the state and one that is playing an ever-increasing role on the world stage.

Units like the 155th Armor Brigade based at Camp Shelby have served numerous Middle East deployments, including in combat zones. Mississippi National Guard engineers and an air defense artillery unit are involved in the Defender 2020 mission, Boyles said, in which American forces are "showing a posture of strength" along Eastern Europe's border with Russia for the first time since the mid-1980s.

The Mississippi National Guard even hosts two air wings -- in Meridian and Jackson, respectively -- and three C-17 large cargo planes based in Jackson were involved in the raid that killed ISIS leader Abu Bakr al-Baghdadi in Syria last month.

"Mississippi is not just this strategic force the national armed services uses," he said. "We are an operational force."

But because the National Guard consists of citizen soldiers -- as opposed to active duty professional soldiers -- deploying them overseas means taking them from their communities, families and jobs.

"So when you mobilize the National Guard, you take the nation with you," he said.

Since he's become adjutant general, the Mississippi National Guard has reduced from 84 to 68 armories, with plans to get down to 58 over the next year, a number that will accommodate its force of 10,000 soldiers.

They did it by divesting old armories to local governments where they were built.

"We had cities (and counties) that wanted armories back for school systems. Some of them wanted them for maintenance facilities," he said. "One of them actually wanted it for a grocery store. ... They rented the facility to a grocery store chain for $1."

About every four years, Boyles said, the guard needs to build a new armory. Also, this year the Legislature appropriated $4 million to upgrade existing facilities, he said.

"You need to be divesting those federally funded facilities back to the communities and build new ones," Boyles said. "That needs to be a continuing process and we haven't really done a good job of that the last 20 or 30 years."