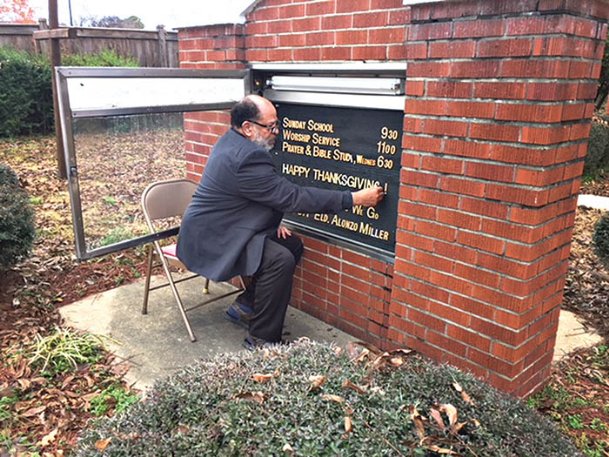 Ross Williams changes the bulletin board outside First Church of Christ Holiness in Starkville on Saturday afternoon. A lifelong member of the church, Williams also serves on several nonprofit boards in the city and is active with Starkville Community Theatre. He retired in 2018 after more than three decades working as Oktibbeha Countyâs school attendance officer. Photo by: Zack Plair/Dispatch Staff

Sitting at a pew in First Church of Christ Holiness on Saturday afternoon, Ross Williams reminisced while he waited.

"This building was built in the mid-1960s," the church clerk, deacon and lifelong member recalled. "But I was baptized in the old (original) building that was right next door. It had a concrete baptistery built in the floor at the front of the church, right in front of the pulpit. ... They would lift the floor up and the pastor would baptize folks right there."

The church built a new parking lot last year across Gillespie Street from the main building, convenient walking distance from Mississippi State University's Davis Wade Stadium. For each Saturday home football game, the church's Brotherhood, including Williams, allows fans to park, for a fee, in the lot -- a fundraiser that helps pay for its construction. By 1:30 p.m., roughly five hours from MSU's Homecoming game kickoff against Abilene Christian, there had been no takers. But Williams determined, "we'll be here" when fans did come.

As simple as it sounds, Williams' success hinges primarily on "being there," or put more poetically that half of any battle is won by "showing up." He built a career on the maxim.

Williams, 61, retired in 2018 from Starkville-Oktibbeha Consolidated School District after 35 years, including his first year as a reading program instructor at Sudduth Elementary and the last 34 as the county's state-appointed school attendance officer. In that role, he was to ensure all school-age children attended public or private school -- or showed proof they were being homeschooled -- and petition the youth court to enforce state law if a child's school attendance was neglected.

"One of the things I was told was, 'Your job is to make sure you don't have a job,'" Williams said.

But he did, and sometimes it exposed him to difficult situations. Once, he recalled, a straight-A student suddenly stopped coming to school as a teen, and eventually a judge signed an affidavit that allowed sheriff's deputies to enter the home. What they found there were conditions that led to the house being condemned.

"It was a bad situation, but as a result of that a lot of folks in their church helped out and got the house back in a livable condition," Williams said. "That student never missed another day of school after that ... and he went on to get a master's degree.

"It took that intervention," he added. "But some people just fall through the cracks."

Still, Williams emphasized encouragement over enforcement when it came to incentivizing school attendance. Since 1995, he and his wife have personally funded more than 25 $500 scholarships for Oktibbeha County students who complete K-12 with perfect attendance. Each year except two, Williams said, there has been at least one recipient, and some years there have been two or three. Last year, the scholarship went into an endowment through the CREATE Foundation, so it will continue even after Williams and his wife pass on.

A Starkville High School graduate, Williams initially majored in architecture at MSU, but he said he lacked the artistic skill to stay with it, instead earning a degree in social sciences. His interest in community development never went away, though over the years it took on a different form than designing and planning neighborhoods.

He serves on the board for Starkville-Oktibbeha Achieving Results, the local affiliate of Tupelo-based CREATE that awards grants to local nonprofits. He also sits on boards for the Salvation Army, Brickfire Project and other benevolent organizations.

Williams is talented on stage, too, performing in dozens of Starkville Community Theatre productions since the mid-1980s, most recently in 2017 as the pastor in "To Kill a Mockingbird." He even played a role in "Witness for the Prosecution," the first-ever performance in the Greensboro Center.

"I started as a stage hand in 1984 for a performance of 'Our Town' (at MSU)," he said. "From that point, I started gradually getting more roles on stage."

His most difficult was a role was in 'God's Favorite.' He was on-stage most of the time and had lots of lines, he said, but all that was amplified by his mother being in the hospital after she had a wreck during production.

"One night, I forgot all my lines," he recalled. "So I kept having to go off-stage, look at the book and go back out there. But it worked out, and we got through it."

Williams' theme, and his task, he said, never stopped centering on developing the community he's always called home. And in whatever capacity he's able, he said he intends to keep "showing up."

"I've always been passionate about making Starkville a nice place to live," he said.