'They think they're the dogs': Caledonia family raising pet turkeys 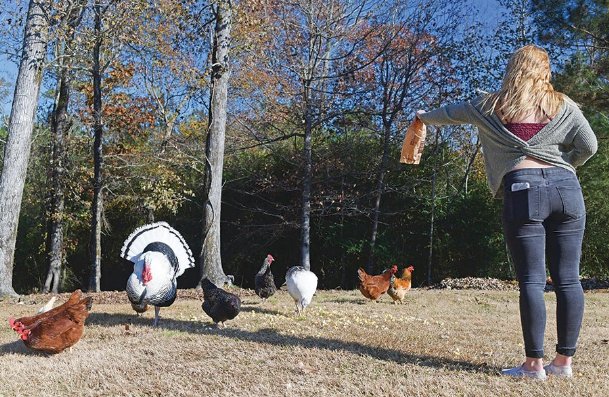 Caitlyn Parker dumps the last of a bag of popcorn on the ground for the chickens and turkeys to eat on Monday at her family's home in Caledonia. Shortly after dumping the bag, the chickens retreated to the woods to hide. The Parkers let the birds out at 6 a.m., and they then roam free throughout the day. Photo by: Jennifer Mosbrucker/Dispatch Staff 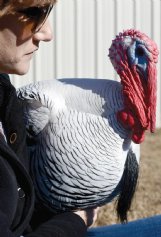 Holly Parker holds her turkey, Willie Nelson, on Monday at her home in Caledonia. Willie Nelson is one of two turkeys in the Parker family, the other being Dolly Parton. When Nelson is relaxed, the wattle on his neck is red. When he is agitated, the flesh becomes white.
Photo by: Jennifer Mosbrucker/Dispatch Staff

The white Royal Palm turkey, christened Willie Nelson, will never be the centerpiece of a Thanksgiving meal if his owner Holly Parker has anything to say about it.

"I told the kids at the school, 'Get a ham,'" Parker said, though she later admitted that her family is planning to "fry up a turkey" for Thursday -- just not this turkey, or his mate Dolly Parton.

Willie and Dolly are the family pets, Parker said, having free range of the Parkers' massive yard at a home just off Highway 12 in Caledonia. The family began obtaining turkeys about two years ago after Parker's husband retired from the Marine Corps and the family moved to Caledonia to be closer to Parker's parents.

After years of living in neighborhoods, Parker decided she wanted chickens in her more country setting. Taking care of chickens turned out to be easy.

"We kept getting more and more," added Parker's daughter Caitlyn, a sophomore at Mississippi University for Women, who helps care for the family's nine chickens.

That was when Holly decided the family should get turkeys, too.

They started out with five, but got rid of three when all but one turned out to be male.

Delivered at only a day old, the turkeys imprinted on them which means "they think you're their mom," Parker said. Getting them through the first six months of life was sometimes difficult, but once they were fully grown -- Dolly is about 20 pounds and Willie is 27 or 28 -- they were easy, Holly and Caitlyn said.

Now Willie and Dolly are waiting at the door every morning at 6 a.m. when Holly gets up.

"I think they think they're the dogs," she said, sitting cross-legged in the yard with Dolly settled in her lap, Willie "strutting" around them and occasionally pecking at them for attention Monday afternoon.

With Holly's best friend being a teacher at CES and with Thanksgiving being only days away, Holly decided to put Willie on his leash Friday and let him visit her friend's second-grade class so the kids could see and learn a little bit about turkeys. Of course, once Willie visited one class, word got around the school, and soon and students and teachers were flocking to get a closer look at Willie.

"It was pretty much the rest of Caledonia Elementary that came out there," Holly said. "Each kid one by one got to pet him and take pictures, and then we did a class picture with all of them."

Holly always knows when Willie is upset because his waddle -- the long flap of skin over his beak -- and the skin around his head will turn from red to white, which is what happened at first when "about 50 kids" descended on him Friday. Once he realized the kids wouldn't hurt him, he settled down and let them pet his feathers. After a couple of hours, he got tired, said Holly, who has several pictures of Willie cradled in CES teachers' arms with his head tucked against their shoulders.

"The kids had a ball up there," Holly said. "It was pretty darn cute. ... One lady literally sat down and Willie got in her lap and nuzzled his whole face up on her neck."

Most people Holly talks to think turkeys are mean, but Holly says that's not true for Willie and Dolly. The two turkeys have befriended several neighbors, the UPS delivery man and a neighbor's pig named Stella, who occasionally visits the Parkers' yard to spend time with Willie and Dolly.

"It's real funny when the turkeys, the chickens and Stella are all here eating the food," Holly said.

The turkeys eat fruits, vegetables, eggs, meal worms and "movie theater popcorn," said Caitlyn, who scattered popcorn across the yard to attract the turkeys and chickens away from her mother. Once the birds all ate their fill, the chickens and Dolly disappeared into the small crop of woods behind the Parkers' house, while Willie fanned out his tail feathers and stood guard.

At the end of the day, the chickens will retreat to their fenced-in roost, and Willie and Dolly will settle on top of the roost, Holly said. Both her family and the turkeys are content.

"They're like yard ornaments for me," she joked. "They're pretty to look at and they're super nice. How many people can lay out by the pool and a turkey come chill with them?"