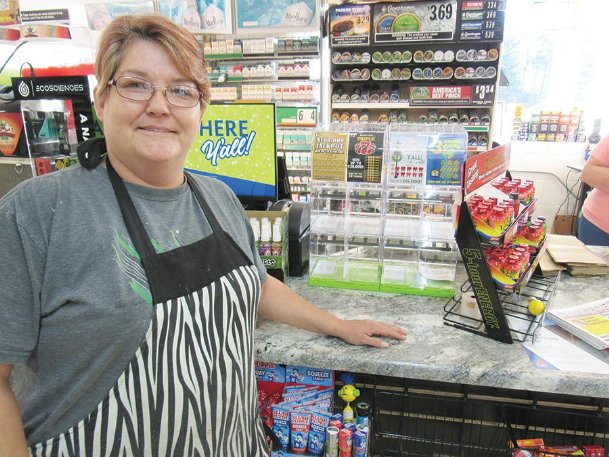 State Line Express employee Kathy Flippo said a delay in the delivery of scratch-off game cards for the Mississippi Lottery to the store meant turning away about 50 would-be lottery players Monday morning, the first day of the state's lottery. State Line Express is the closest lottery vendor to the Alabama state line, so interest was particularly high. The store did receive its scratch-off games by noon, becoming one of more than 1,200 retailers across the state participating in the state's lottery. Photo by: Slim Smith/Dispatch Staff

Chesika Porter, manager of Dutch Village Sprint Mart at the intersection of Highway 12 and Highway 50 in Columbus, said interest in Mississippi's Lottery, which began Monday, was steady all morning. "We sold our first scratch-off at 5 this morning, right when the lottery opened," she said.
Photo by: Slim Smith/Dispatch Staff

Christopher Blair shows off the "3 Times Lucky" scratch-off game card he purchased Monday morning at the Dutch Village Spring Mart in Columbus. Monday was the first day of operations for the Mississippi Lottery, which feature four varieties of scratch-off games with prizes as high as $100,000.
Photo by: Slim Smith/Dispatch Staff

Luther Gardner, 77, who lives a few miles from the State Line Express in northern Lowndes County, had made two trips to the store between 6 a.m. and 8:30 a.m. in an attempt to purchase scratch-off game cards that is part of the new Mississippi Lottery, which began Monday. A delay in delivery of the game cards kept Gardner coming back.
Photo by: Slim Smith/Dispatch Staff

It's the route Alabamans take to their jobs in Mississippi, many of them at the big industries in the west part of the county. For years, the store was a quick stop for breakfast on the way to work, but beyond that, there wasn't much of an advantage to a location on the Mississippi side of the state line.

Monday was the day that proximity to the Alabama/Mississippi border was supposed to be of strategic importance -- the day Mississippi's new lottery went into effect with scratch-off games that could win players as much as $100,000.

Employees at State Line Express had been trained and the display cases were all set up.

Between 5 a.m., when the store opened and the first scratch-off tickets were allowed to be sold, and 8 a.m., more than 50 customers stopped in the store to buy a ticket. Many others called to see if the store was selling them.

"We didn't get the scratch-offs," said Kathy Flippo, who arrives each morning to prepare breakfast items the store sells. "I guess the bright side is we sold more breakfasts. People came in for the tickets and when we didn't have them, they got something to eat."

At 8:30, Luther Gardner, 77, had made his second trip to the store from his home a few miles away in Alabama in a bid to buy scratch-off tickets, again to no avail.

He remained determined, providing his phone number to a clerk, who promised to call him when the scratch-offs arrived.

Following the route workers most often take to work down Highway 25, the Dutch Village Sprint Mart was the next available lottery vendor, where sales were steady all morning.

"We sold the first ticket at 5, just when it started," manager Chesika Porter said. "I think the turnout is going to be great, just from what we're seeing already. I think it will be even better when we get the regular lottery in. A lot of people were looking for that this morning. We're looking forward to that."

The lottery was approved during a special session of the Mississippi Legislature in August 2018, with the first $80 million in revenue dedicated to road/bridge infrastructure and any revenues above $80 million earmarked for public education.

Meg Annison, communications director for the Mississippi Lottery Commission, said roughly 1,200 retailers were selling scratch-offs in Mississippi's 82 counties as of Monday's opening day, with more expected to be added.

"It's a 30-day application process, so we do know there are some retailers out there who haven't finished the process," she said. "We've had some first glitches, as you might expect, but they've been few. Overall the roll-out has been very good."

"Everybody's really excited," Jabar said. "We've had a lot of people in both stores coming in for them."

Monday's rollout featured four games -- a $1 scratch-off, two $2 scratch-offs and $5 scratch-off. Grand prizes range from $3,000 to $100,000. Winning tickets for prizes less than $600 can be redeemed at the place of purchase. More valuable prizes are distributed through the commission offices in Jackson.

"We'll be rolling out new games every few weeks," Annison said. "Then, on January 30, we'll have the MegaMillions and PowerBall lottery games available."

It's one of the multimillion lottery jackpots that Christopher Blair was waiting for Monday.

"That's the one I'm going to hit," he said after purchasing a single $1 "3 Times Lucky" scratch-off ticket.

Blair said winnings aside, the arrival of the lottery will be a plus for the community.

"It's going to bring in a lot of revenue," Blair said. "So that's good for everybody."

To find a retailer or for other information, go to www.mslotteryhome.com.