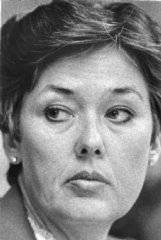 Edna Boone, who was the first woman on the Columbus City Council, died Saturday at Baptist Memorial Hospital-Golden Triangle at age 77.
Photo by: Dispatch file photo

Edna Boone occupies a unique place in Columbus history: She was not only the first woman on the Columbus City Council, she was also responsible, at least in part, for the third.

Boone, 77, died Saturday at Baptist Memorial Hospital-Golden Triangle. Among friends and family, she'll be remembered for a variety of qualities, but she will be more broadly recalled as her role in breaking the glass ceiling in Columbus city government.

Elected to the council in 1981, Edna Jones, as she was then known, served two terms, leaving city government in 1989. Joined by Virginia Hooper as the two women on the city council from 1985-89, she recruited her replacement on the council.

"Edna lived just down the street and she came to the house one day," said Nan Lott, who would succeed Boone on the council. "She brought a casserole. I was recuperating from surgery at the time. She told me she wasn't going to run again and wanted me to run. I had just come off the school board and I told her I'd have enough of politics. So my answer was no. But after I recuperated, I started thinking about it. I changed my mind and decided to run."

Dewitt Hicks, who served as city attorney during Boone's tenure on the council, remembered her as someone who was well prepared and easy to work with.

"She was an excellent city council member," Hicks said. "She was someone who had really sound judgment and you could tell she really had the city's interests at heart. Mayor (James) Trotter was a hands-on mayor and ran the show, for the most part. But I think he always valued Edna's opinion on things."

Lott said her predecessor didn't have much of an agenda during her time on the council.

"I don't recall any particular issue that she pushed," Lott said. "She was there to be open-minded and do what was best for the city."

There was one exception, though.

"It's one of those things people probably don't even remember now, but Edna really pushed for (curbside) garbage pick-up," Lott said. "Back then, the garbage workers had to go into people's backyards to get their trash cans. It took forever for them to collect it all. Edna thought that was ridiculous and she was able to get that changed. It may sound like a little thing, but it made garbage pick-up a lot more efficient and organized."

Hicks said Boone was a popular council member and probably could have been elected to more terms.

"Even in recent years, when we would go out to lunch or somewhere, people would still come up to Edna and say they wished she would run for the city council again," Lott said.

"She got remarried and I think after that, she and her husband (Bob Boone) decided that the two terms was enough," Hicks said. "They wanted to do other things."

The friendship between Lott and Boone endured.

"We were close friends," Lott said. "We lived in the same neighborhood, our children were the same age and we went to the same church (Fairview Baptist). She was very hospitable. She loved to have people over. Probably seven or eight years ago, we got up a regular card game and we loved doing that together.

"She was just a good-hearted, friendly person," she added. "She was very generous with her time and loved helping people. I think that was why she ran for the city council. She was just one of those people who are always looking for ways to help."