Cedarhill aims for $5,000 in raffle to win weekend at animal sanctuary 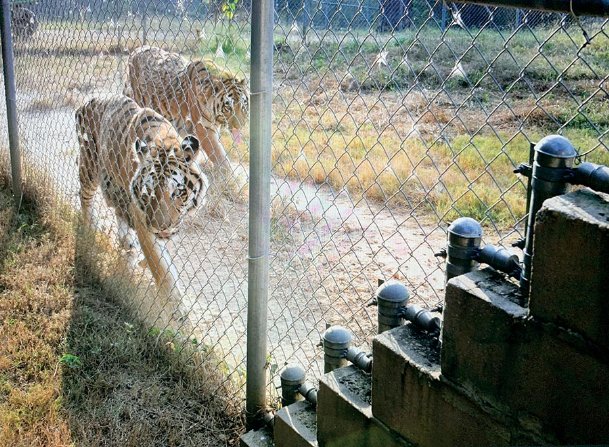 In this Oct. 5 file photo, brothers Mr. Big, front, and Kumar, wait for their caretaker to feed them as they pace around their enclosure at Cedarhill Animal Sanctuary in Caledonia. Up to four people can win a trip to Cedarhill to see these two tigers and more animals if they enter an annual fundraising raffle that helps raise money to support hundreds of animals living at the sanctuary. Photo by: Jennifer Mosbrucker/Dispatch Staff 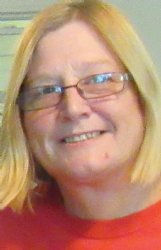 The exotic feline alarm clock at Cedarhill Animal Sanctuary in Caledonia goes off every morning about 6 a.m. when the sanctuary's four lions begin to roar.

"You get used to it after you've been around it for a long time," sanctuary director Nancy Gschwendter said. "I find that even though it's so majestic that when it happens, it's the coolest thing, I sometimes don't even hear it anymore. (But) if it didn't happen, I'd notice it."

The sound will greet up to four guests who will win a raffle to spend a weekend of their choosing at Cedarhill. This is the sanctuary's fourth year holding the raffle as its end-of-the-year fundraiser, and it has already brought in $1,470 in about two weeks.

Those wishing to enter the raffle can pay $20 for 10 tickets, $55 for 30, $90 for 50 and $190 for 100 tickets. All participants must enter online, and the drawing is computer-generated and completely anonymous to sanctuary staff, media development manager Michelle Roberts said. Dec. 31 is the last day to enter.

The money goes directly toward helping Cedarhill's collection of almost 300 animals, including 11 tigers, three bobcats, 12 horses, six pigs, more than 200 cats and several others in addition to the four lions. Almost all the animals were rescued from situations of abuse or neglect and brought to the sanctuary, which is not open to the public.

The raffle winner and guests will stay in a two-bedroom guest house that is supposed to "really make you feel like you're at home," complete with a TV and a fully stocked kitchen, Gschwendter said.

The sanctuary will treat them to dinner at a restaurant when they arrive on a Saturday afternoon, and they will get to watch staff feed the exotic animals Sunday morning. They will get a tour of the sanctuary and be able to spend the rest of their time with the animals however they wish, whether they want to pet the domestic cats or play with the pigs.

The guests will also get to watch a tiger or lion paint a picture on canvas with its paws, and they get to choose the colors, Gschwendter said.

"It's a one-of-a-kind thing that you get to take home, and you watched it being created," she said.

Each animal has a different story that brought him or her to Cedarhill. Three new lions, Nombi, Jala and Tafari, came from a California sanctuary that closed in August after fires and flooding in the area made it too expensive to renovate. Atlas, a Bengal tiger, was flown to Cedarhill on a private plane after someone tried to own him illegally, Roberts said.

"You can't ever trust a wild animal because they are still wild animals, and it just amazes me that there are people in the United States that try to have these animals as pets," Roberts said. "That's a big reason why a lot of them are here."

Cedarhill employees never touch the exotic animals, but they do know the individual names and quirks of the cats in the two domestic cat houses and treat them according to their personalities, Gschwendter said.

"We give them back the dignity that mankind took away from them," she said.

Some of the animals look forward to seeing their caretakers every day, and Roberts said she has gotten used to tigers walking alongside her on the opposite side of the fence in their enclosures.

"I always tell people I have a tiger that's happy to see me when I get to work, and that's just the neatest feeling in the world," Roberts said.

Gschwendter said the sanctuary is restorative for human souls as well as animals, and the ones that have been through tough situations could give humans a new perspective on life.

"It's really hard to feel sorry for yourself when you look at disabled animals doing what they do every day," Gschwendter said. "They don't realize they're disabled. I've seen blind cats reach for flies out of the air. I've seen a three-legged dog jump over a fence. (You can't) tell them they can't do it, and I really wish people would take that lesson away from here."