One arrested in armed robbery 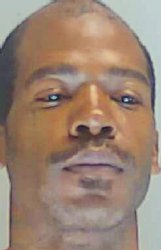 Keith Richardson, 37, of West Thomas Drive, has been charged with armed robbery and burglary, according to a CPD press release. Richardson allegedly robbed the Tobacco Warehouse on Alabama Street at about 9 p.m. on Nov. 25 by threatening the store clerk with a weapon, demanding cash and cigarettes.

The clerk was not injured.

The press release said Richardson later dropped the bag of cash and cigarettes and that investigators found it.

During the investigation, police linked Richardson to a burglary at the Exxon station on Main Street three days earlier, during which Richardson and another suspect allegedly broke the windows while the store was closed and stole cash, cigarettes and beer. The incident was caught on camera, which led to Richardson's burglary charge.

The other suspect in the burglary case, Carlos Morgan, 40, has not been linked to the armed robbery case.

"An anonymous tip started us on this investigation," he said in the press release. "We were able to solve two recent cases with it. Our investigators and police officers on the scene did great work to gather and preserve evidence from both cases and result in these arrests."