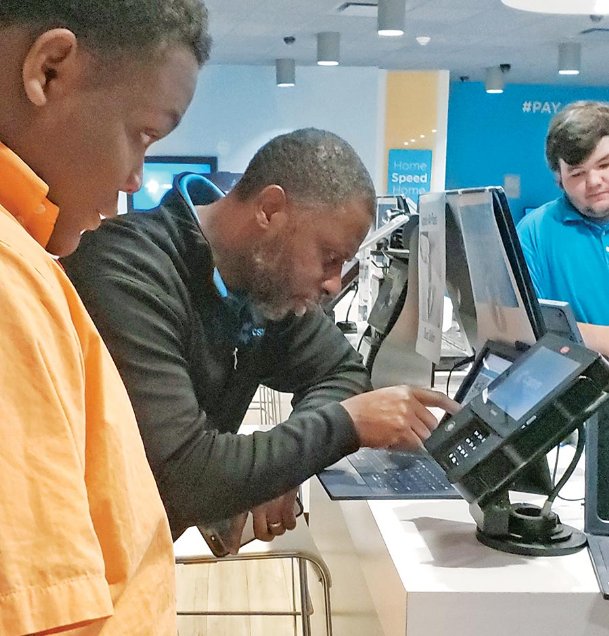 STARKVILLE -- Tuesday night, a dozen juniors and seniors from Starkville High School showed off their computer technology skills at the C Spire store in Starkville.

Collectively, they are the first class of a C Spire pilot program called The C Spire Software Development Pathway.

But the students could also be called Gap Closers.

The SHS students were among a group of six schools that took part in Tuesday's "Hour of Code" event across the state, allowing the students to show off what they have learned from the program.

C Spire launched the pilot program in 2017, but this is its first year at Starkville High School. With the support of C Spire, the program is a collaboration among Starkville's Millsaps Career and Technology Center, Mississippi State University -- which developed the curriculum -- and East Mississippi Community College, which provides one of the two instructors for the classes. Participating students earn EMCC credits through dual enrollment.

C Spire estimates there are 1,000 coding jobs in Mississippi left unfilled for a lack of trained employees.

"We're actually second to last in the country as it pertains to coding and having people ready to take on those jobs," said Joe Wilson, C Spire's market manager for Starkville. "Right now, we are outsourcing jobs throughout the world. What we want to do with this pilot program is get our kids in Mississippi up to speed so we can keep those jobs here. The average coding job pays about $70,000, so these are good jobs. The more kids we can get into this, the more we can move Mississippi forward. That's our motivation."

With two years of specialized high school courses and one year at EMCC, students can receive up to four Microsoft certifications and an associate's degree in applied science. Those qualify them to go to work or pursue a four-year degree.

Since August, the Starkville High students in the program have worked with a classmate to learn the basic tools and begin applying them by building websites. Tuesday, the students showed off their work, which ranged from simple pages to more elaborate, employing navigation bars, drop-down links and JavaScrpit images.

Under the program, EMCC Information Technology System Director Brandon Sesser teaches the students two days a week while Millsaps teacher April Dill teaches the other three days. MSU's Shelly Hollis developed the curriculum. This semester, students have learned HTML and CSS, along with an introduction to Java Script.

Sesser has been impressed with the students' progress.

"They've outrun the majority of the college students I've had contact with, teaching web development," he said. "I'm super proud of them."

The students seem well aware of the opportunities the classes provide.

"Before this, I had some experience with graphic design and interior design," junior Kahlan Smith said. "These classes helped me put them together. They give me something I can use anywhere I go, no matter what city, state or country. Technology means more money, more jobs. This class has prepared me for a future doing something I love."

Dowanika Smith, a senior, said the classes will help her no matter what career path she ultimately chooses.

"Most jobs have technology," she said. "I think this is something everybody needs to learn."

Tyson Lucious, a junior, said he plans to pursue a four-year degree in computer technology. This class, he said, has jumpstarted that effort.

"I do think this puts us ahead of the game," he said. "What we're learning right now is going to take us far."