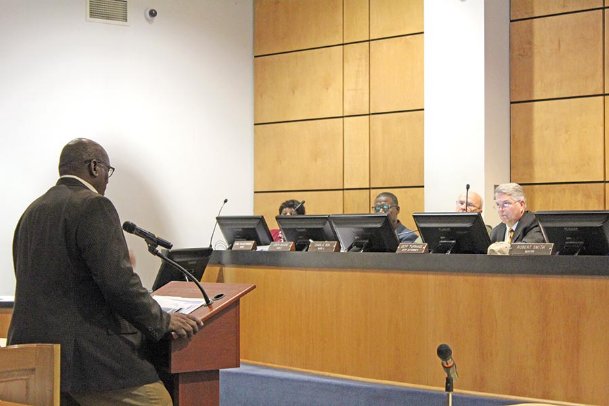 Mayor Robert Smith gives a presentation on city finances and an upcoming project to replace the city's more than 4,000 street lights with more energy-efficient LED lights during Tuesday's city council meeting at the Columbus Municipal Complex. The $3.2 million project is expected to be complete by June 2020 and will save the city $33,000 per month. Photo by: Isabelle Altman/Dispatch Staff

A project to install more than 4,000 energy-efficient LED lights in the city is set to begin this month.

Russ Phillips, co-founder of Memphis, Tennessee-based energy savings contractor Path Company, told the Columbus City Council at its meeting Tuesday the project will save the city $33,000 per month by the time it's completed. The more energy-efficient lighting will also be brighter.

The city council opted earlier this year to contract with Path on a $3.2 million project to replace the city's lights in hopes of saving hundreds of thousands of dollars a year. The city took out a 15-year loan to pay for the project, but Mayor Robert Smith told The Dispatch the city will make the money back in energy savings well before the 15 years.

In addition to the project being a good financial deal for the city, Smith said, it will increase quality of life for the citizens of Columbus.

"From a safety standpoint, it's going to improve the entire city," he said.

Even city council members who were skeptical about timing -- the project came on the heels of an $881,000 deficit in Fiscal Year 2018 and a deadly tornado that hit Columbus in February -- thought the project was a good one.

"I do think over the time it's going to save a good bit of money for the city and it's going to provide a lot of protection and convenience for the citizens," Ward 6 Councilman Bill Gavin told The Dispatch.

While the project technically begins in January, Phillips and Smith said city residents and Columbus Light and Water have identified about 350 street lights that are currently out. The fixtures for those lights have been ordered and will be replaced over the next two months, with Smith adding that some lights have already been replaced.

"The drop date should be Dec. 16, and once they get here, then they will get started on replacing the 350," Smith said. "Those will be the priority."

Full project installation will begin on Jan. 27, Phillips said. Smith said there are more than 4,300 city owned lights in Columbus.

Phillips said he encouraged citizens to report light outages to the city through SeeClickFix to ensure those lights are replaced quickly.

"We can prioritize those outages accordingly and get those rolled in so that people are not without lights," he said.

Also during Tuesday's meeting, Smith said the city has saved about $2.1 million as a result of cost-saving procedures, though approximately $1.4 million was saved as a result of a hiring freeze and open positions in the Public Works department, Columbus Police Department and Columbus Fire and Rescue -- including the open position of assistant police chief, which has been vacant since last year, and a head of CPD's Criminal Investigation Division, which has been open since former head Capt. Stacey Deans passed away in August.

Not including those positions, CPD has nine open positions, as does CFR. Public Works has 12.

The city also saved $450,000 through a reimbursement on City Hall renovations and $180,498 through changes to medical insurance coverage.

"I would like to thank the council, the department heads and all the other employees for working with us," Smith said. "We're going to have to continue to be frugal in our spending in the upcoming years."