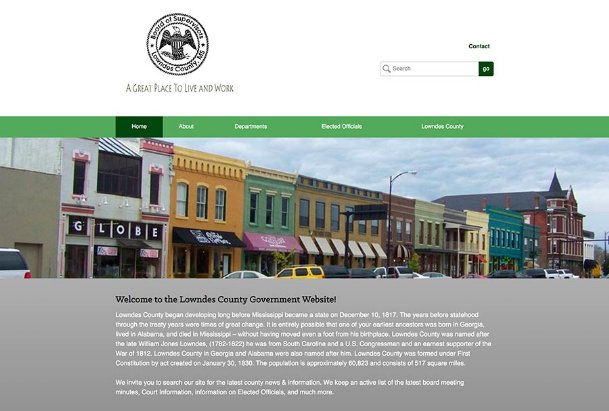 The current Lowndes County website will soon be replaced with a new interactive site that is being built, hosted and maintained by Kansas-based CivicPlus. The county contracted the company, which provides website services to more than 3,500 local governments, for $13,000 plus an annual hosting/maintenance fee of $3,000. Photo by: Courtesy image

Monday was a big day for Al Quinn, probably the most important day since Quinn was hired as Lowndes County's information technology director two years ago.

During its regular board meeting Monday, supervisors voted unanimously to hire CivicPlus to develop, host and maintain a new website for the county.

"Getting a new website was one of the biggest goals I had when I got the job," Quinn said. "The site we have now is badly outdated, hard to manage and hard to get information out to the public. It's just not very useful. There were security issues, too. It was well past time to do something. Getting a new website was definitely on the top of my list."

Quinn recommended hiring CivicPlus, a Kansas-based website development company that has provided services to more than 3,500 county and municipal governments throughout the U.S. and Canada. Lowndes County will pay CivicPlus $13,000 to build a new website and $3,000 annually to host and maintain the site. The contract can be renewed on a yearly basis.

Currently Mississippi State hosts the site while Cynthia Thompson, the county's IT administrative assistant, was responsible for updates and maintaining the site.

CivicPlus was one of 10 to 15 companies Quinn researched.

"The reason I wanted CivicPlus was that they have a lot of experience building websites for counties and cities, not only across the United States, but in Mississippi," Quinn said. "They built the website for DeSoto County and also the city of Starkville. When I talked to people in Starkville, they were really pleased with their work."

Starkville Mayor Lynn Spruill said the city turned to CivicPlus to build its new website shortly after she was elected two years ago.

"I'm really pleased with the website," she said. "I don't have anything bad to say about it. It's definitely better than the one we had before."

John Pugh, regional sales manager for CivicPlus, said his company's familiarity with the needs and vagaries of local governments makes for an ideal partnership.

"We're a 20-year-old company and all we do is develop and maintain websites for counties and cities," Pugh said. "We believe that experience enables us to be real partners. We understand their needs."

"There will be a lot of things we can offer," Quinn said. "Citizens will be able to pay fees and taxes using the website's online payment options. We're also talking about using the website for permits. Really, the idea is to make as many of the things people have to come to county offices to do available online."

Pugh said CivicPlus will continue to work with the county as it adds new features.

"It's sort of like we're building the county a house next door to the one they have," he said. "We'll help them move the furniture into the new house, but we'll also be ready when the county wants to bring something new in. This will be a continuous process. When the county wants to add content, our job will be to work it into the website and make sure it works."

That, said Quinn, is another big advantage for his department.

"Now, we can focus more of our time on content," Quinn said. "I think it's going to really allow us to serve citizens in a much better way than we have been able to do until now."

Quinn said CivicPlus is already working on templates for the website as he works on determining which features he would like to add.

"It's not set in stone, but it looks like the website should be operational in about three months," Quinn said.