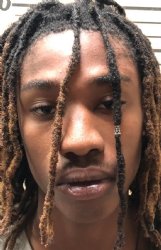 Brandon Jackson of Starkville allegedly robbed the Sprint Mart on Academy Road just before midnight on Tuesday, according to a Starkville Police Department press release. SPD had asked for community assistance Wednesday in finding the suspect and released a video that showed a hooded figure in black entering the convenience store, pointing a gun at the checkout counter and leaving with a bag.

Jackson is being held in the Oktibbeha County Jail on $100,000 bond.