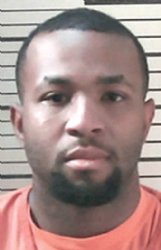 A Columbus police officer is on administrative leave after he was arrested Sunday night for residential burglary and misdemeanor domestic violence.

Melvin Shirley, 24, is a patrol officer with Columbus Police Department. Officers with Mississippi Bureau of Investigation, with assistance from Lowndes County deputies, arrested him Sunday and took him to Oktibbeha County Jail. MBI is investigating the case since it involves a local law enforcement officer.

An MBI spokesperson did not release further details on the case when contacted.

Columbus Police Chief Fred Shelton and Public Information Officer Joe Dillon both Shirley is on administrative leave pending approval from the city council and mayor. They did not comment further.

Shirley has been patrolling with CPD since June, though he attended the police academy as a CPD officer before then.

Shirley has been released from custody on $11,000 bond.