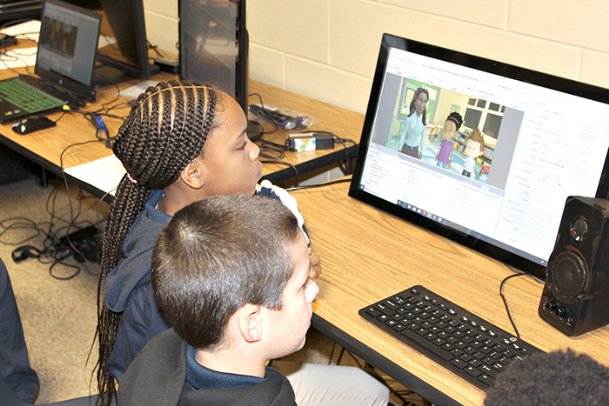 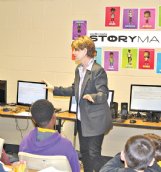 Cherie Labat has been superintendent for Columbus Municipal School District for about a year and a half. Her next role for the school may very well be on the big screen.

Labat spent about an hour Tuesday morning with Joe Cook Elementary fourth graders giving voice to an animated character -- which bore a striking resemblance to the superintendent -- on the Story Maker software platform.

"Now that we have your character, you never know where you may pop up," Sandra Brace, director of education partnerships for Hollywood, California-based Wonder Media, told Labat after her part was finished. "You may just show up as Aunty Em."

CMSD is one of 98 districts in the U.S., and the only district in Mississippi, using Story Maker, a literacy and technology platform that helps teach the basics of building a 3-D animated story.

Stokes Beard Elementary and Columbus Middle School used the platform in 2018-19 to create scenes for an animated feature length version of "The Wizard of Oz" that will play at Malco Theater in Columbus in January.

"This is going to be a very personalized film for each district that does it," Brace said. "So in the version that will play here, there will be images and things specific to Columbus. It brings it back home (for the audience)."

This year, about 50 fourth- and fifth-grade students at Cook -- half from the Gifted program as well as 25 others selected -- will join Stokes Beard and CMS to create scenes for a similar project, "Return to Oz." This year, though, the project is more challenging. For the sequel Dorothy returns to an Oz in crisis, where crops are dead and the trees are hewn down. How she gets her beloved Oz and its inhabitants out of the mess will be entirely up to the writers.

"Last year, we gave the students a script to bring to life," Brace said. "This year, they'll be writing everything. They'll have to problem solve and offer a script that offers solutions to problems that range from agricultural to environmental."

Labat admitted it's "pretty cool" to have her own cartoon character, especially one students helped her bring to life.

"It's amazing," she said. "But what's more amazing is these students having input on how this whole project will be completed. Giving our students this kind of exposure is incredible."

How the platform works

A few years ago, former CMSD superintendent Philip Hickman saw Wonder Media co-founder Terry Thoren present on Story Maker at a tech conference. At that time, the platform wasn't designed for children, so Hickman approached him about changing that, Brace said.

Over the next 2 1/2 years, Thoren -- creator of such Nickelodeon animated series as "Rugrats," "The Wild Thornberries," "Real Monsters" and "As Told by Ginger" -- developed the software as a technology and literacy tool for schools. He selected CMSD among the first districts to have a crack at it.

"Animation has always been a part of (Thoren's) life," Brace said. "Now this is his legacy stage, where he wants to get the power of animation into the hands of kids."

Students work in four-person crews -- a producer, voice actor, sound engineer and animator -- to create scenes. They can select from stock avatars, then use the software to create backgrounds, control characters' motions/gestures and add their script and sound effects.

"It definitely helps their writing and the structure of their writing as they work on scripts to be animated," said Heather Rowland, CMSD Gifted Program coordinator. "Even just working collaboratively and seeing their work, which is work adults do in Hollywood, gives them an idea of career exploration and a sense of success.

"This gives them an opportunity to write for a purpose," Rowland later added. "If they want to have a good production, they have to put in the time and effort to have a good script."

Brace joined Wonder Media almost two years ago after teaching for more than 30 years, either in the U.S. or New Zealand, in classrooms ranging from kindergarten to college. On Tuesday, she was providing Cook students more intensive training -- funded by a 4-County Electric Cooperative grant -- on Story Maker to help better prepare them for Dorothy's "Return to Oz."

"This is the only kind of job I could imagine having ever left the classroom for," she said.

Joshua James and Daltin Sherman, both fifth graders at Cook, looked in amazement at the new things they learned about Story Maker Tuesday morning. But since first getting their hands on the software earlier this school year, Rowland said they've taken to it like a fish to water.

"I like to work with the characters and make them do stuff," Sherman said. "I've always wanted to be an animator. ... This gives me more to think about with my characters, so I have much more information in my writing."

James has taken his mission a step further, entering a Wonder Media contest to create an avatar that could be included as a stock character in the platform.

The challenge was for students to create a character with conflict, develop that character's back story, then animate and pitch the character.

James created Cyber Sam, a kid with a speech impediment and a penchant for technology who struggles to relate with others his age.

"Sometimes he says things he means as a joke, but they offend the other kids because they don't get it," James explained.

James likes his chances in the contest, but he also noted his experience with Story Maker has made him think a little differently about the cartoons he watches at home.

"When I watch cartoons now, I'm picturing how they make the animations," he said. "It takes us a long time to make a 30-second clip. (Professional animators) make a bunch of episodes. It must take them a really long time."