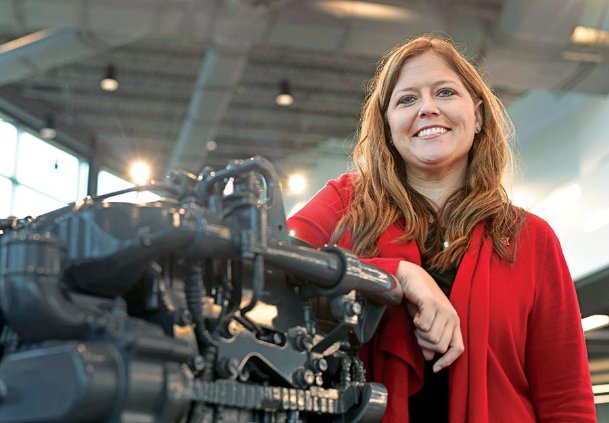 Courtney Taylor was in her first week on her new job when a situation emerged that perfectly illustrates the hybrid nature of her role.

In mid-November, Taylor learned that Stark Aerospace had laid off 25 workers and, as the newly-minted executive director for East Mississippi Community College's Communiversity, she was asked to assist in helping the displaced workers find new jobs.

"Here I was, in this 145,000 square-foot building, still trying to figure out where everything was and I get the call," said Taylor, who started the job Nov. 11. "It was kind of exciting, in a way. It forced me to figure out some things maybe a little earlier than I had expected. For me, it was an opportunity to figure out where my place would be moving forward, which is to work and talk to people to see what we can really do. What's our piece of it?"

Officially, Taylor is responsible for guiding EMCC's workforce development program, a broad spectrum of classes, programs and training designed to meet the needs of area employers for companies of all sizes and productions.

That includes running the $42 million industrial training center that opened on Highway 82 in Lowndes County earlier this year.

But in another respect, her role goes beyond workforce development in the ever-evolving modern workplace.

"I think what this region, in particular, does well is that everybody's kind of in everybody's business," she added. "I think that's necessary as we are moving forward. The only way to have the people really ready for these jobs is for me to be at the table with the economic developers when they are making that decision. That's one of the things that attracted me here. I feel like there's a solid connection and this role gives me the opportunity to play a little bit everywhere."

"I think what stands out the most was that the moment I met her, I just sensed she was 'our people,' the kind of person the Golden Triangle can identify with," Whitaker said. "You could tell she had done her homework. She had a really good sense of who we are."

Taylor said another part of her job is exposing young people not only to what EMCC and Communiversity have to offer, but the opportunities throughout the community. That's something, she said, many communities lack.

"You know, adults have controlled the information for so long," Taylor said. "We've told kids, 'No. You need to do this. You have to do that.' And when they do those things and aren't successful -- when they come out of college with a degree and can't find a job -- we ask them, 'Why are you working at Starbucks?' They say, 'I just did what you told me to do.'

"In my world, it's about, 'Here are the opportunities. Here's a buffet of things. You have options. It's your choice. If you to go get a four-year degree, that's fine. But there are other opportunities, too. You decide,'" she added.

For Taylor, that means exposing kids to the opportunities in their own communities.

"My uncle worked for a big manufacturing company, but I never toured it, never saw it, never even really knew what they did until long after I was out of college," Taylor said. "I think we've done a better job (in the Golden Triangle) than a lot of places. We have so many tours and kids are seeing what's out there. Now, our job is to connect the dots. Work is not a natural thing for some people. Kids don't have that first-job experience, so we're working with local high schools on some first-job initiatives."

That's exposure to all sorts of work, including jobs in the area's larger industries, where exposure can be difficult.

"Industries are big, mythical places," Taylor said. "They operate in a really cool building somewhere behind a big fence. Nobody knows what's going on in there. I understand why it has to be that way. There's an awful lot of proprietary information in those buildings.

"But what happens is normal people have no way to access information about those jobs," she added. "... That's another part of where we can come in. We can tell people, 'Here is what the companies are doing. Here's what the job looks like. Here's what you need to know.'"

Given all her responsibilities, Whitaker said she believe Taylor is a perfect fit.

"Whatever the obstacle is, she gets real practical and figures it out," Whitaker said. "She's not a 'no' person. She's a voracious consumer of information and that allows her to have a very broad viewpoint of a variety of issues. That's a big part her job. She's only been here a little while, but she's already delivering."