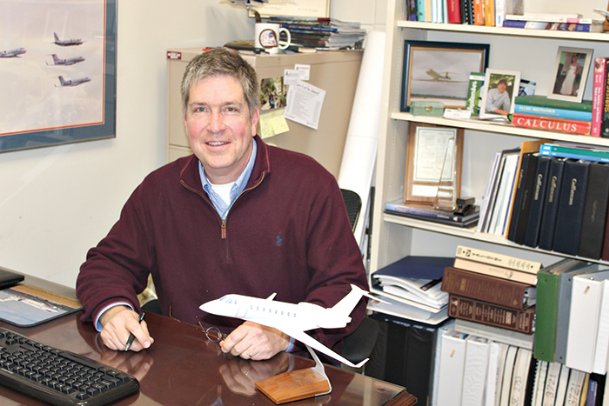 Rob Wolz sits at his desk in Mississippi State Universityâs Walker Hall showing off a model of a Gulstream G280. Wolz, now an instructor at MSU, worked 35 years as an aerospace engineer with Gulfstream in Savannah, Georgia, helping design more than $70 billion in products. Photo by: Zack Plair/Dispatch Staff

Rob Wolz shows off a framed commemoration of the first flight of the Gulfstream G650 that hangs in his office at Mississippi State University. Planes Wolz helped design have flown military VIPs, Congressional contingents and even U.S. presidents.
Photo by: Zack Plair/Dispatch Staff

Rob Wolz is in his second year as a full-time aerospace engineering instructor at Mississippi State University.

The smattering of classes he teaches range from a senior lab and engineering mechanics to spacecraft propulsion. A cursory observation of his office on the third floor of Walker Hall gleans a picture of his more focused passion -- Wolz is an airplane guy.

Prominent atop tables and file cabinets are airplane models, mostly Gulfstream. On the walls are framed commemorations of different aircraft models' inaugural flights. Tucked away on a bookshelf behind his desk is a picture of an SR-71 jet signed by none other than Maj. Gen. Eldon Joersz, one of two pilots on a 1976 flight that still holds the world airspeed record of 2,193 mph.

These are some of what Wolz calls the "tokens," the "bits and pieces" that remind him of his past and how he can maybe shape his students' futures.

"Part of what I want to do is share my experiences," Wolz said. "I'm also trying to get them excited about the career opportunities that are out there."

Wolz has plenty to draw from. In a 35-year career as an aerospace engineer for Savannah, Georgia-based Gulfstream, he helped design more than $70 billion in products. Planes that began as ideas in the capable minds of Wolz and his fellow designers have flown VIPs for every branch of the military, diplomats and other dignitaries, Congressional contingents and even U.S. presidents.

If not for the waiting list to the Air Force Academy in Colorado Springs, Colorado, Wolz would have taken a different path entirely.

Raised in Chester, Illinois, a town of about 5,000 residents just across the Mississippi River from St. Louis, Wolz said he picked up a love for art and working with his hands from his father -- a dentist by trade who also dabbled in carpentry. His father, an Air Force veteran, was also a pilot with a private plane in which the younger Wolz often flew as a passenger.

By the time Wolz graduated high school, he had all the prerequisite approvals needed to enter the Air Force Academy, but being 50th on the waiting list, he decided to attend Mississippi State rather than waiting another year to start cadet training. In Starkville, he met his eventual wife, Melinda. After Wolz earned his degree in aerospace engineering in 1982, the two moved to Savannah where Wolz began working for Gulfstream -- starting as a team member in development and design and working his way up to project management roles.

This required working closely with the production team to turn theoretical ideas into planes that would actually fly, a task Wolz said was sometimes easier said than done. It also took working with client needs and keeping an eye on the competition.

"When it came to the competition it was a big chess game," Wolz said. "We'd take information from brochures, newspaper articles, anything we could get our hands on. Then we talked about things like, 'Can they do it?' and 'If they do it, how are we going to respond?'"

With each new design or modification, Wolz said, came higher performance standards, more safety features and more advanced technology. What once was a machine with independently operating mechanical parts evolved into a more integrated, computerized vehicle.

"In the later years, since electronics were changing so much, we began thinking more like computer companies," Wolz said. "... Bringing in technologies that were much more dependent on software was a challenge."

Twice Wolz worked on unsuccessful collaborative projects to design a supersonic civilian jet (one that would travel faster than the 767 mph speed of sound). Once he worked with a team that included Joersz. The other equally memorable time involved Gulfstream and Rolls Royce partnering with two Russian fighter jet manufacturers in 1990 -- the waning stages of the Cold War with the crumbling Soviet Union.

Wolz never traveled to Russia, but he said he enjoyed the cultural exchange with Russian engineers that worked with him in Savannah.

"They loved going to Walmart," Wolz recalled. "They went home with blue jeans like you wouldn't believe."

By 2017, Wolz retired to return to the Golden Triangle, where he worked for a year as a project manager for composite structures at Stark Aerospace -- designing parts to be incorporated in Boeing and Gulfstream aircraft -- before taking a faculty position at MSU.

But when one of the last projects he helped design at Gulfstream, the G500, completed a Transatlantic flight in July 2016, it helped Wolz better realize what his three-plus decades of work had really meant.