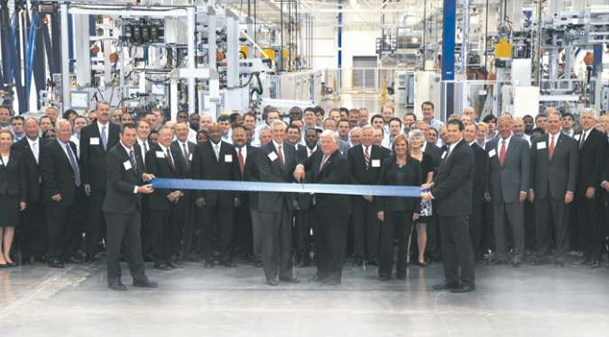 At 6:37 Monday evening Paccar CEO Mark Pigott and Gov. Haley Barbour, standing in front of a phalanx of blue-shirted workers, local dignitaries and the company''s board of directors, cut the ribbon for what is sure to be one of the crown jewels of the local economy for years to come, the $300 million Paccar engine assembly plant.

The ribbon cutting was the centerpiece of a gala evening that included an address by Pigott and company officials, a tour of the 400,000 square-foot plant and a catered dinner. The meal was served in an entrance lobby dominated by two gigantic trucks, a metallic-blue Kenworth and a fire-engine red Peterbilt. Both are Paccar products.

The plant, located on a 406-acre site near the Highway 82 exit to Golden Triangle Regional Airport, will provide engines for Kenworth and Peterbilt in North America. The facility, which makes extensive use of robots, now employs more than 100; that number is expected to swell to 500 when the company begins to manufacture engine parts at the site. Currently, engine components are produced in the Netherlands and Germany.

"For Paccar, it''s like we''re back home," Pigott told the group assembled in the company''s 100-seat auditorium. "Mississippi provides outstanding people with vitality, skill and leadership who will help define our future. This is only the first step in contributing to this region."

Pigott is the fourth generation to head his family''s 105-year-old company, which has boasted an unbroken string of profits for the past 72 years.

In May 2007, Paccar announced its choice of Lowndes County out of 40 potential sites. At the company''s July groundbreaking two months later, Pigott announced a $2 million gift to Mississippi State University''s Center for Vehicle Systems. Workers began installing assembly equipment in January of this year.

"It''s overwhelming to see the type of investment they''ve made here and the commitment to our area. I can tell by the attitude of the management and the state-of-the-art nature of the plant that this company is going to be a major contributor to our region," he said.

Lowndes County District 1 Supervisor and Board President Harry Sanders compared the high-tech facility to a setting in a comic book.

"It''s a very impressive place -- high-tech robotics, very high-tech machinery. It''s like what you would see in a comic book almost. It''s stuff you don''t see very often, at least not around here," he said.

Sanders also predicted the plant will have a serious impact on the region for decades to come.

"People don''t realize it, but it''s going to have more impact on north Mississippi than the Nissan plant did in Corinth, than the Toyota plant near Tupelo ... It''s going to be really phenomenal," he said. "It''s planned growth is what it is, and they''ve got almost 600 acres out there to expand in. Instead of instant gratification, instant impact, they''re looking long term and 50 years down the road, and it''s going to be phenomenal."

Mississippi University for Women Interim President Allegra Brigham met Paccar''s local managers and many of its corporate executives during her previous job as manager of 4-County Electric Power Association. The power company was involved in every step of the courting process as Paccar narrowed its list of 40 potential locations for its new plant.

"I got to know the local team and they''re very impressive. They''re a quality organization from top to bottom," she said.

Plant manager Lex Lemmers, who served as a guide for one of the two groups of visitors through the plant, said once the plant is fully running, assembly time for an engine will be 16 hours.

"Twelve cylinders?" the governor asked as the group watched a robot lubricate cylinder walls with oil.

"It doesn''t smell like an engine plant," said the governor''s wife, Marsha Barbour.

The plant is spotless, more like a overgrown science lab than a manufacturing facility.

"And you can come back in 30 years and it''ll be just like you see it today," Pigott said.

"I think it''s magnificent. It''s a showplace -- clean as a whistle, laid out perfectly," Sanders said. "The working conditions for the employees is fantastic."

"It looks like you could eat off the floor. The place was pristine," he said.

Once assembled, the engines are painted by two robot arms that resemble two loose-limbed dancers in a jazz club.

Barbour said the truck engine plant is the first of its kind in Mississippi. "They''re doing this the right way," the governor said, referring to the company''s deliberate approach, and noted that the company is hiring Mississippi high school graduates introducing them to a high-tech environment.

"This is a wonderful day," Pigott added.