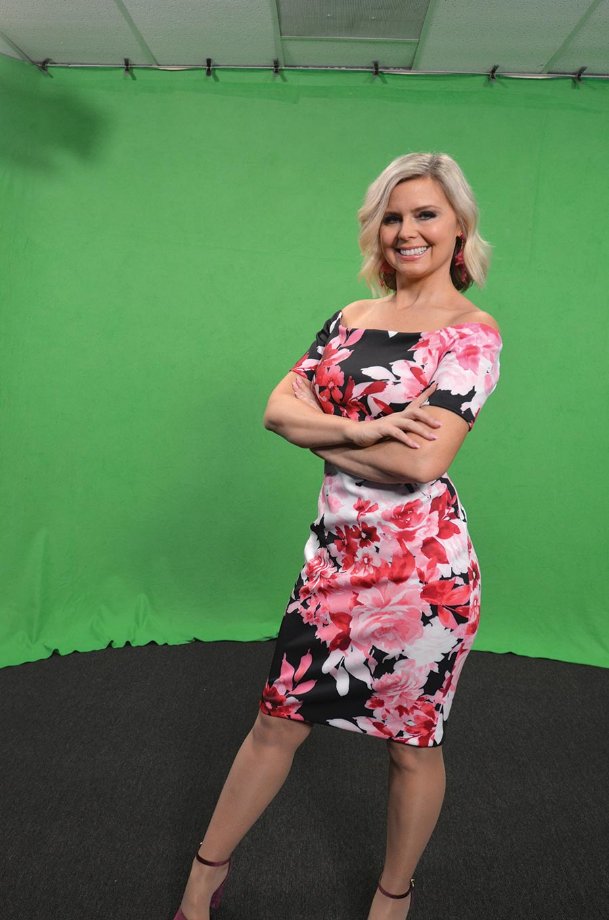 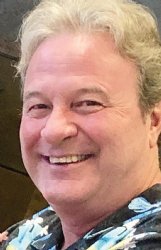 Amy Neely Adkins with her husband and three children during a vacation to the Grand Canyon last year. Adkins is a far cry from DeLois Price, the character she has played on TV commercials for Carl Hogan Automotive for the past 20 years.
Photo by: Courtesy photo/Amy Neely Adkins 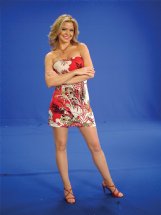 She stands there in a little black dress against the background of a darkened car lot, stares at the camera and coos seductively:

"DeLois Price is twice as nice on a weekend night."

For 20 years now, one 30-second spot at a time, DeLois Price has been a staple of Carl Hogan Automotive television advertising, becoming one of the most recognizable names and faces in northeast Mississippi.

"I have quite a few customers who come in wanting to meet DeLois," said the dealership's sales manager, Jim Stafford. "People have definitely made the connection. I think there are people around who really believe she's a real person, that's she's somewhere on the lot."

DeLois has become something of an icon through an advertising campaign created in the mind of Jim Whisenhunt, owner of Whisenhunt Advertising Inc. in Hoover, Alabama.

"I had no idea she would be this popular," Whisenhunt said. "For an ad campaign to last this long, it's almost unheard of. I think DeLois has had a lot to do with that. There were other characters people liked that came before her, but once DeLois showed up, it went to the next level. The spots get thousands of views on social media, some more than 10,000."

That makes Amy Neely Adkins, the part-time actor who has portrayed DeLois since the start, laugh from her home outside Nashville.

"Do people ever dress up like DeLois Price for Halloween?" she asked. "Sometimes when I'm out somewhere shopping, I'll see something and say, 'DeLois would definitely wear that!'"

So who is DeLois Price, this Enchantress of the Escalade? From whence came this Seductress of the Silverado? And how did this Temptress of the Tahoe set up permanent residency in television sets across North Mississippi?

The answers begin in two places: First, in Alabama, where a young ad man with a whimsical nature decided to strike it out on his own 26 years ago and, second, in a small town on the Tennessee-Kentucky border where a little girl first began to dream of acting in the early 1980s.

What's in a name?

For the past 26 years, Whisenhunt has owned his own advertising agency -- a small, two-person operation with anywhere from 10 to 12 clients at any given time. He has a secretary to run the office. Whisenhunt does the rest, everything from sales and marketing to production of TV and radio ads, which he writes, directs and produces.

In 1998, Jim Cannon, who owned a Chevrolet dealership in Jasper, Alabama, approached Whisenhunt to develop an advertising campaign for is dealership. At the time, Carl Hogan was one of Cannon's business partners.

"Mr. Cannon told me there were two things he wanted to make sure people got from the commercials," Whisenhunt said. "First, they had a big inventory of trucks. That needed to be in there. He also wanted to talk about having lower prices."

As Whisenhunt was thinking about what he would do with the campaign, he remembered something from his childhood.

"Back then, kids would come up with funny names," he said. "I remembered one of them -- Seymour Hiney. When you're a 10-year old kid, that's hilarious."

A light bulb went off in Whisenhunt's head: What if he created characters to drive home the major advertising points? Seymour, as in "see more."

But what of Cannon's second request, the one about low prices?

The character seemed to come to Whisenhunt out of the ether: Peso (pay so) Little, a truly wince-worthy Mexican caricature, complete with sombrero and poncho, a character that has disappeared form the lineup in recent years, for obvious reasons.

But in 1998, when Whisenhunt wrote, directed and produced his first TV spot for Cannon, it was off and running.

Before long, Whisenhunt found himself carrying around a legal pad to jot down character names that would work in other campaigns.

His friends loved making suggestions for characters' names. None of them worked.

One afternoon he had a few friends over for a barbecue. One suggested the name of "Lois" for "lowest."

"I thought, 'hey, that might work,'" Whisenhunt said. "I thought, 'Lois. Lois.' It was close, but not quite right. Then it hit me. DeLois, DeLois Price. That's it."

Once he had a name, Whisenhunt began thinking about the character. What emerged was an attractive, slightly scandalous character that would play off the non-seductive characters already assembled.

He then started looking for DeLois.

"Even though Birmingham is a pretty big town, it only had one real modeling agency," Whisenhunt said. "They sent four of five women who were pretty and read the lines well, but somehow they just didn't fit with what was in my mind, who DeLois should be."

The agency had contacts with another talent agency in Nashville. One of its clients was Amy Neely, who had just been crowned Miss Tennessee USA the year before and was hoping to get her acting career off the ground.

"She got hold of the script, read the lines and sent me the video," Whisenhunt said. "I knew in about 15 seconds, she was DeLois."

Whisenhunt hired Neely -- Adkins since her marriage in 2002 -- who made her first appearance in a 1999 ad for Cannon's Alabama dealership.

DeLois Price arrived in Columbus in 2000. She's been attracting car shoppers here ever since.

Adkins grew up in Lafayette, Tennessee (pop. 3,500), about an hour's drive from Nashville.

"I wanted to be an actress from the first day I can remember," she said. "That's why I did pageants. I was a small-town girl trying to figure it out."

Her seven-year pageant career culminated in 1998, when she was crowned Miss Tennessee USA. The acting career has developed a little slower, in fits and starts. She confesses she could have probably worked a little harder in pursuing that goal.

"When I booked the DeLois Price job, I was at my peak, as sad as that may sound," she said. "By then, I didn't have to audition for parts anymore. Of course, there was only so much work you could find in Nashville 20 years ago."

In retrospect, the timing could not have been much better.

"As an actress, you're looking for any work you can find," she said. "One of the things I did was trade shows. I started doing some trade shows for a tech company. They liked what I was doing. They said I was doing a great job working with customers and wanted to really teach me everything. So they invested in me, sent me to school, gave me a sweet salary, benefits, a Mercedes, just everything.

"I thought I'd save up enough money to move to Los Angeles and really get my acting career going," she continued. "But I loved the work. I haven't left. I've been working for IBM for a year now, selling tech services to extremely large organizations."

Given her career commitments, the DeLois Price gig was a perfect arrangement. At first, all of the commercials for a year -- six total -- were shot on a single day in January. For the past 10 years, two year's worth of commercials are shot over two days, again in January.

"It's fun to do and there's not a lot of time commitment involved," she said.

Although she's had other acting credits -- two feature film roles and two TV programs (she played the role of a killer in the true crime series, "Snapped," in 2016) -- Adkins is comfortable playing DeLois Price.

"When I started doing DeLois, I was much younger, obviously," she said. "Honestly, she wasn't so far-fetched from who I was as a person before I got married. Being from the pageant world, I was used to glamming it up and being really friendly. That was my personality. I didn't have the sexual undertones DeLois had, but apart from that, we were similar."

But for better or worse, DeLois hasn't changed too much over the years -- and Adkins has changed an awful lot.

"I won't tell you my age, but you can probably figure it out," she said. "I'm a married woman with a 16-year old son, a 12-year-old daughter and a 6-year old son. I do know that people have complained about DeLois sometimes. ... (But) I'm really strong in my faith. We're not that much alike."

As the years have passed, the TV spots have evolved. The clothes DeLois wears aren't quite so tight. Her skirts are longer, her necklines higher and the content is a bit less suggestive, a concession to both Adkins' age and Whisenhunt's understanding of the sensibilities of the day and how women are portrayed in media.

"You can't do what you did before or do it in the same way," Whisenhunt said. "We've toned in down some."

"I look back and think, 'Oh my gosh, what were we thinking?'" she said. "I've never vetoed a script, but there were plenty of times I worked on Jim to get him to take it down a notch or two. Some of that stuff, I just can't believe it."

Whisenhunt has had two Seymour Trucks and two Peso Littles, but only one DeLois Price.

At some point, he knows, he'll either have to replace Adkins or send DeLois into risque' retirement.

"DeLois is DeLois. She can't really change," Whisenhunt said. "(Amy) still looks way younger than she is. She can still do the role, but the last couple of times we've shot, she's talked about giving it up."

That time appeared to have arrived last year.

"I called him and said, 'Jim I don't feel like I can do this anymore,'" she said, "I said, 'I'm embarrassing my kids. My son is a teenager. Somehow he and his friends find the commercials and they talk about it.'"

When she hung up the phone, she told her son.

Adkins called Whisenhunt back to let him know she would do another two-year series.

Next January, when the campaign will shoot new ads, it's still up in the air if Adkins will be reprising her DeLois Price role.

DeLois Price is standing in a car lot again, this time wearing a tight sleeveless red dress, as she plunges chips into a bowl of salsa.

"If you look closely, you'll notice I laugh at the end," Adkins said.