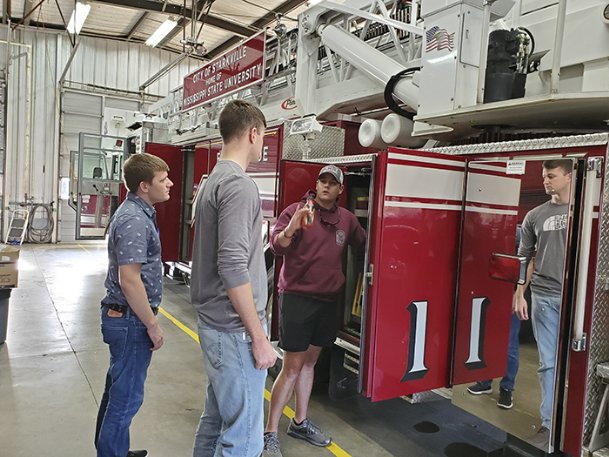 Firefighter Steven Lane, right, shows new hires Ryan Classen, left, and George Grandfield the equipment, including ladder belts and a tool kit, in a compartment of a fire truck at Fire Station 1 on Lampkin Street in Starkville on Jan. 8. Classen and Grandfield were hired the previous day by the board of aldermen, and the department now has enough employees to keep Fire Station 5 on Reed Road fully staffed 24/7, for the first time since it was built, Chief Charles Yarbrough said. Photo by: Tess Vrbin/Dispatch Staff

Housekeeping is part of the job, they said, and they will be training for the next several weeks, learning the tools and skills they need to respond to an emergency.

The hiring of Classen, Grandfield and two other entry-level firefighters allows Fire Station 5 to be fully staffed, for the first time since it was built a decade ago. The new hires will be at Fire Station 1 on Lampkin Street, but more experienced firefighters will be transferred to Station 5 on Reed Road, Starkville Fire Chief Charles Yarbrough said.

The Starkville board of aldermen approved the new hires and the promotion of five firefighters to lieutenant and sergeant positions at its meeting on Jan. 7. Yarbrough said recently promoted Lt. Greg Cochran will be one of the Fire Station 5 staff.

"Having those folks closer in case we have a fire or something, it gives us manpower, (and) you don't ever have enough," Cochran said.

The city's fire stations are supposed to be fully staffed 24-7, with firefighters working in 24-hour shifts and having 48 hours off in between. Fire Station 5 is near the interchange of Highways 82 and 25, where Yarbrough said car wrecks regularly happen, and the station was closed every third day. The department was lucky the lack of staff never heightened an existing emergency in the city, Yarbrough said.

"We just prayed nothing major happened," he said.

'This was a must-have'

The city's property tax increase of 1.5 mills is expected to generate about $400,000 to cover a variety of costs. Yarbrough said he advocated for a means of staffing Fire Station 5 and appreciated the board of aldermen's "progressive and forward-thinking" attitude for choosing to address the longstanding need.

"We told them that this was a must-have because for one shift out there (every few days), the people in that area weren't protected," Yarbrough said.

The fire department built the fifth station in order to keep up with the city's growth but was not able to continue meeting those needs with new hires. The department has added and adjusted resources over time, and some of those resources depend on manpower, recently promoted Lt. Sam Wilkes said. In his 16 years with the department, it has implemented ladder trucks at two stations, and three people are required to operate those trucks. Sprint trucks are pickup trucks that respond to all calls, including medical calls, and require two firefighters apiece, Wilkes said.

"They're just growing needs of the fire service," he said. "Fifteen years ago, we didn't need this stuff. We didn't respond to nearly the medical calls (that we do now). We responded to a lot more structure fires. It evolves, it's changing and it will continue to change."

Yarbrough emphasized that "the citizens are going to reap the benefits" of their tax dollars paying for new firefighters.

Classen grew up in Macon, and Grandfield is from London, England, and has lived in Starkville for 10 years. Both said helping others fueled their career choice, and Grandfield said his military background means he wanted to continue working with a tight-knit group of people who share the same mission.

"And I feel like I'm too young to sit behind a desk," Grandfield said. "I like being out in the field."