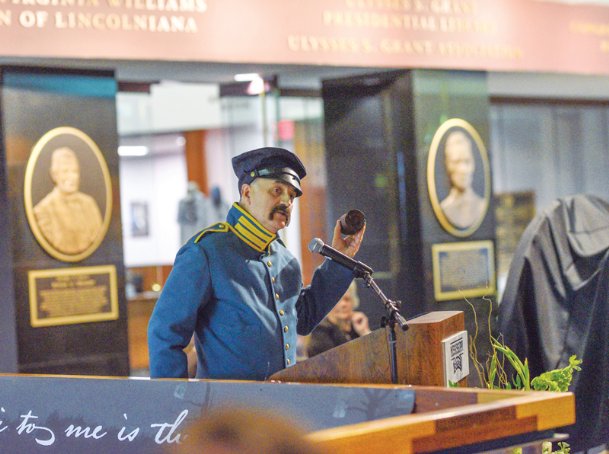 Duffy Neubauer, dressed as a U.S. regular from the 1840s, holds up a projectile found in the Model 1841 cannon presented Monday at Mississippi State University. The cannon it came from, which likely saw action in the Mexican-American and Civil wars, is now sitting outside the Ulysses S. Grant Presidential Library on Mississippi State University's campus. Photo by: Austin Frayser/Special to The Dispatch

The rare Model 1841 "6-pounder" was unveiled at Mississippi State University Monday in front of the Ulysses S. Grant Presidential Library.
Photo by: Austin Frayser/Special to The Dispatch 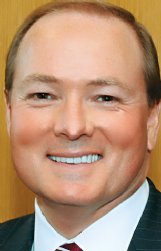 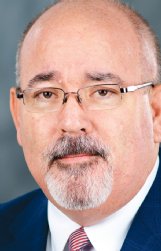 Duffy Neubauer, the curator of the Starkville Civil War Arsenal and a self-proclaimed "cannon guy," was cleaning the barrel of a Model 1841 "6-pounder" cannon in December when he came across something he didn't expect.

As he pulled out broken bottles and trash that had accumulated during the decades the cannon spent at Veterans Memorial Park in Jackson, he hit something "really hard" about three feet into the barrel.

"I had some tools (so) reached down in there ... and produced this three-inch Confederate round," Neubauer said Monday, holding up the projectile for a crowd of a few dozen spectators to see at the unveiling of the cannon, which now sits outside the Ulysses S. Grant Presidential Library at Mississippi State University's campus. "If you can look ... you can see the fuse hole right in front. Don't ask me what it was doing in there. It has been fired."

The round was a very common projectile fired at the Battle of Vicksburg in 1863, Neubauer said, but the cannon in which he found it may have seen even more action -- and more American history.

The cannon is on loan indefinitely to MSU from Mississippi Department of Archives and History, said MSU Chief Communications Officer Sid Salter. Produced in 1846, the cannon would have been used in the Mexican-American War and the Civil War, said MSU President Mark Keenum, who also serves on MDAH's board of trustees.

The cannon caught Keenum's eye while he was touring the basement of a Jackson museum which stored historical artifacts. He reached out to MDAH about loaning it to MSU for display outside Grant Presidential Library.

Keenum said he also reached out to Shiloh National Military Park, which loaned the university a carriage to set the cannon on. After welding students from East Mississippi Community College repaired the carriage, the whole display was taken to the fourth floor of MSU's Mitchell Memorial Library.

According to information provided by MSU, the Model 1841 "6-pounder" weights 876 pounds and is more than 65 inches long. It could fire a 6-pound projectile 1,500 yards and was a "critical asset" of the U.S. Army's field artillery arsenal in the 1800s.

In the 1890s, the 6-pounder was turned over to the Mississippi National Guard where it remained until the Guard gave it to the City of Jackson in 1911, Neubauer said. It stayed in Veterans Memorial Park until the 1970s or 1980s, when it was put in storage where Keenum later came across it.

Keenum said the cannon has a connection not only to American history but to Mississippi's history.

"We had young men leave here in 1846 ... to go off and fight in Mexico," he said. "This cannon was commissioned in 1846 just on the eve of the start of the Mexican War. It most likely saw action in Mexico, possibly with young men from Mississippi.

"This is truly history, if you will, coming to life," he added.

The Grant Presidential Library and Frank and Virginia Williams Collection of Lincolniana makes MSU one of only a handful of universities in the country with its own presidential library and a destination for scholars and authors wanting to do a "deeper dive" into the history of the Civil War, Keenum said -- "not from the Northern perspective or the Southern perspective, but an American perspective."

Salter said the memorabilia for Grant and Lincoln available at the library is "the best in the country" and called the 6-pound cannon a "magnificent" addition to the library.

"The fact that scholars are coming here, not just from the Confederate perspective or the Union perspective, but as scholars who want a holistic study of the period -- the run-up to the war, the conditions that led to war, the conduct of the war and consequences of that and then the aftermath and reconstruction," Salter said. "We've had (nationally acclaimed historian) Ron Chernow here, the most prominent Grant scholars in the country. This has turned out to be a real destination for people who are serious students of the Civil War and who don't have an agenda."

Neubauer said Ulysses S. Grant was a lieutenant and quartermaster during the Mexican-American War, meaning he handled supplying the troops with artillery, food and other supplies. Neubauer says he "can't believe" Grant wouldn't have had a connection to the particular 6-pounder now sitting in Mitchell Memorial Library during the Mexican-American War, and that even if he hadn't, it's equally likely he came across it in the Civil War.

"I can't prove it, but I sure like to think he walked by this cannon," Neubauer said.