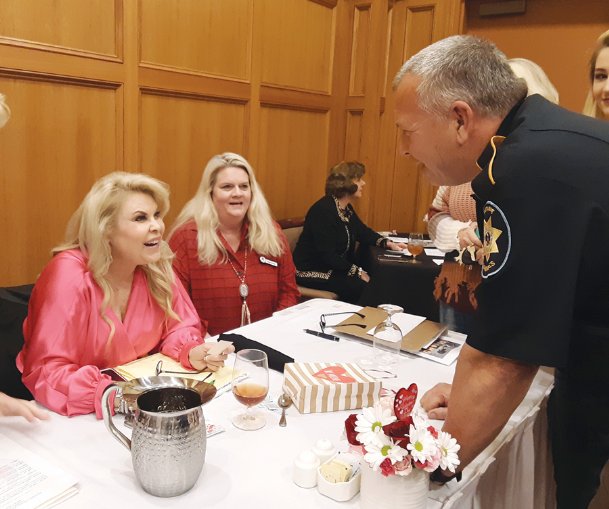 Lauren McGraw, left, speaks with Lowndes County Constable Chris Griffin after a meeting of the Lowndes County Republican Women at Lion Hills Center Tuesday. McGraw pushed for the Mississippi Legislature to pass a law mandating law enforcement officers notify those under 21 of the right to call their parents when they're pulled over for a DUI. Photo by: Isabelle Altman/Dispatch Staff

Lauren McGraw does not consider herself a public speaker. Instead, she's a talker.

The Macon native who grew up driving to and from Columbus talked to everyone gathered at the monthly meeting of the Lowndes County Republican Women at Lion Hills Center on Tuesday, where, in true Southern fashion, she knew about half the people in the room, or at least their friends or relatives, she joked. As she eluded to the three businesses she owns -- including a liquor store, despite the fact that she doesn't drink -- and her childhood -- her face was on a milk carton when she was 14, she said -- it became clear she had plenty of stories to talk about.

But the story she told the crowd Tuesday was about her son, Rivers, who she called "the light of my life," who died by suicide after being pulled over for his second D.U.I. in 2016. He was 20 years old and in college at Ole Miss.

McGraw was key in pushing the state Legislature to pass House Bill 1089, also known as Rivers' Law. The bill, passed almost unanimously in 2017, requires law enforcement who stop individuals under 21 for a D.U.I. or related offenses to notify the suspect that they can call a parent or guardian in addition to calling an attorney and that there are drug courts and other pretrial diversion programs available for them.

McGraw said Rivers had already been pulled over for one DUI his first semester at college. She had taken him out of school, sent him to a treatment center in Arkansas for 90 days and then had him work the rest of the school year. His record had been expunged, and she felt law enforcement should have notified her, since the car he was driving was in her name and she was paying for his expenses.

"But that didn't happen," he said. "His friends were able to bail him out and I never knew."

'Tell them you love them'

McGraw said Rivers had always been a great athlete and was captain of the football team at Jackson Prep where he attended high school. But when he went to college, instead of playing sports, he became involved in a fraternity, where she feels sure he and his friends were into drugs and alcohol.

"He had had coaches that were like fathers, and he needed that," McGraw said. "I had been a divorced mother for 10 years of his life, so those coaches are so important. You don't ever know what you're doing for a kid when you're in that position.

"When he got to State, he didn't have football anymore," she said.

The weekend she and her daughter went to a football game at Texas A&M was the same weekend Rivers was pulled over for his first DUI. He called her and McGraw told him to go home and wait for her.

The treatment center McGraw sent Rivers to was run by a former football coach -- "I thought, 'This is the kind of guy that's going to get along with my son'" -- and it first it seems to have worked. After Rivers was released from treatment, McGraw sent him to work for a construction company for the rest of the school year where he impressed his supervisors so much they called McGraw and asked her to let him stay with the company rather than going back to school.

Instead, McGraw said, she let Rivers transfer from Mississippi State to Ole Miss. Within three months, he had gotten another D.U.I. and, since his friends bailed him out, she didn't know.

"I could take the car away, take the money away, if I'd known," she said.

He sent her a text before he died that said: "I love you. I'm sorry I keep disappointing you."

She added his friends, apologizing to her for bailing him out of jail because he'd done the same for them before, told her they had all "been there."

"They're whispering, because other mamas are in the kitchen," McGraw remembered. "I said, 'Been there? What do you mean?' 'We've all thought about killing ourselves.' ... These are great kids ... and they're sitting there telling me 'we've been there. We've ...gotten in trouble and we don't want to call our parents. We were scared, and we felt like that too.' I thought right then: 'I've got to do something. ... I can't have another one of them."

Rivers' friends' confessions led McGraw to reach out to state officials and get the bill written and passed within a year after Rivers' death. McGraw said she hoped it would keep other parents from going through what she went through.

She also had a message for her audience: to remind their children that they love them.

"Tell them you don't condone bad behavior, but you love them a lot," she said.