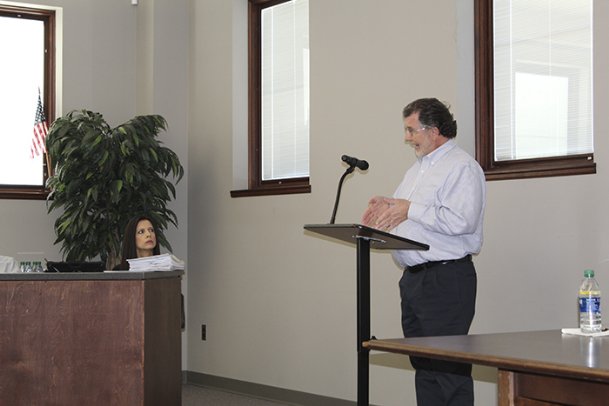 CPA Charles Shivers gives the Lowndes County School District school board a report on the districtâs audit at the Central Office Friday. Though the audit was clean, Shivers noted several examples of items missing from financial statements or board minutes that needed to be corrected. Photo by: Isabelle Altman/Dispatch Staff

The CPA handling Lowndes County School District's financial audit declared the district's audit "clean" during the board's regular meeting Friday, but not without raising several examples of incorrect filing procedures and information missing from board meeting minutes -- the latter of which had board members questioning Business Officer Kenneth Hughes as to whether he had presented certain expenses to them at all.

The CPA, Charles L. Shivers of Ridgeland, said he and a team went through six months worth of the district's Fiscal Year 2019 financial statements, partially to prepare for the State Auditor's Office, which has announced plans to audit every school district in the state within the next four years.

Shivers noted a range of issues, from paperwork errors like forms not being filled out properly, or being filed too late, to information omitted from financial statements and board meeting minutes. He raised as an example that donated food items from the Department of Agriculture weren't on the books, and that in one instance of the board approving the purchase of career-technical equipment, the vendor's name was missing from the minutes.

Among the findings, Shivers noted the district paid $52,000 for a contract buy-out for copiers last year when it switched from RJ Young to Novatech. However, auditors found no documented evidence the school board ever approved the buy-out.

"The school district paid $52,000 and some change for a contract buy-out for copy machines and reproduction services," Shivers said. "There was no formal documentation that was provided to us from the vendor and agreed to by the school board with regard to that buy-out. We did not see any documentation in the minutes to support that particular transaction as well."

Board member Brian Clark asked whether that expense had come before the board at all.

"The way I recall, the previous superintendent did push for a new copier company, but I was never informed of a contract buy-out from a previous copier company," he said.

Hughes said the expense was on the claims docket approved by the board, and pointed out the board had also approved switching companies. But that was not enough for board member Jacqueline Gray.

"Did you know prior to us actually approving the new vendor that we would have to pay $52,000 to RJ Young?" she asked, and when he said yes, added, "Why did you not present that to the board? Was it presented somewhere else? Was it presented to the superintendent?"

"I'm not an attorney," Hughes answered. "I did not know he was going to ask to say, 'Where is this board approval to terminate this contract?'"

Board members Wesley Barrett and Jane Kilgore both said they would have liked to know about the cost to the district when approving switching contracts.

"If someone's going to bring something before the board about an offer to go to a new contract, it would be nice if we were informed it was going to cost the district this much," Barrett said. "... Just having all the information about the implications of stopping the existing thing and choosing the next one. I'm just thinking that information would have been good to be provided, I think."

In answer to a question from Clark, Shivers said he would work with the district's business office to correct errors.

"I think if you look at the responses that have been made, you're going to see that either the controls have been or they're in the works to be put in place to overcome these deficiencies," he said. "One of the responsibilities of the auditor on future engagements is to follow up on your response to see that it has been implemented."

Hughes told The Dispatch after the meeting that the audits -- both by Shivers and by the state -- are designed to "find something."

"It's nothing that we can't fix or haven't fixed already," Hughes said.