Plane collides with hangar, bursts into flames at Columbus-Lowndes airport 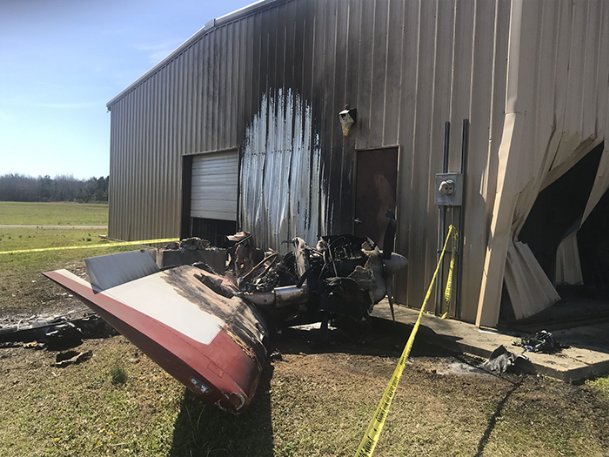 A plane rolled away from its pilot Saturday morning and crashed into a hangar at Columbus-Lowndes Airport. The pilot was priming the engine at the propeller of the single engine aircraft when it started unexpectedly. The pilot was not seriously injured and reports indicate the plane never left the ground. Photo by: Courtesy photo/City of Columbus

A pilot suffered minor injuries and a private plane was destroyed when it struck an aircraft hangar at the Columbus-Lowndes County Airport and caught fire Saturday morning.

The plane is a single-engine experimental aircraft model RV-8A, manufactured by "kit aircraft manufacturer" Van's Aircraft of Oregon, according to a City of Columbus press release. The pilot was attempting to prime the plane's engine by manually moving the propeller when the engine started unexpectedly. The pilot was not in the plane when it collided with the hangar. He refused medical treatment.

"This was not an intentional start of the engine," Airport Manager Jared Rabren said in the press release.

The plane's registered owner is Nicholas Ervin of Valdosta, Georgia, according to the FAA's website.

Officials have notified the National Transportation Safety Board. The airport remains open.

City officials did not identify the pilot, other than to say he is licensed by the Federal Aviation Administration and lives in Columbus.

"The plane moved forward, turned to the right, struck an electrical panel, then another airplane hangar building and caught fire," he said. "Reports are the plane never left the ground."

Firefighters contained the blaze, but the hangar suffered "major damage" the press release said. City Public Information Officer Joe Dillon said officials will have a better idea of the cost of repairs later this week.

"It could have been a lot worse," Andrews said in the press release. "We are glad the pilot and no one else was seriously injured during the accident. The plane is destroyed, and the building can be repaired, but safety for human lives is most important."