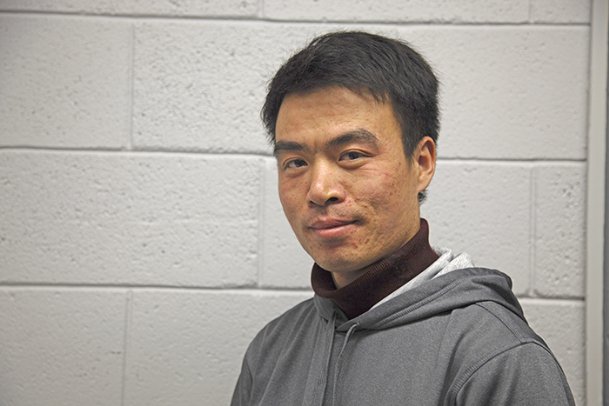 Ronghua Wu, a visiting scholar at MSU, just finished his two-week self-quarantine after returning to the U.S. from China. Reflecting on his experience back home with his family for the Lunar New Year, he said he had to cancel plans to visit his own parents due to the threat of the virus. âI think none of the Chinese really enjoyed the New Year this time,â he said. Photo by: Yue Stella Yu/Dispatch Staff

Saijuan Chen (left) and Yibin Wang (right) chat with each other about the impact of the coronavirus in their hometowns. Chen, a visiting scholar at MSU whose research focuses on animal viruses, said many in China and from abroad have donated medical supplies to Hubei and other provinces at the center of the epidemic to help people through the crisis.
Photo by: Yue Stella Yu/Dispatch Staff

On a late-January flight back from Shanghai to Starkville, Ronghua Wu lost sleep.

The woman sitting next to him wouldn't stop coughing. All passengers were wearing masks, including him. The mask straps were pressed tightly against his face, he recalled, leaving marks on his cheeks and causing pain that he found hard to endure.

"The atmosphere on board was depressing," Wu said. "I wore that mask for about 24 hours and my ears were hurting so much ... but I never dared take it off."

Wu, a visiting scholar in agriculture at Mississippi State University, had just returned home to China to spend the Lunar New Year with his family in Fuzhou, Jiangxi, amid the coronavirus outbreak. The virus, which broke out in Wuhan, Hubei in late December, has now claimed more than 1,500 lives and sickened tens of thousands in China.

Wuhan, the center of the epidemic, is now under lockdown. Other local governments have shut down highways, delayed schools and imposed certain restrictions on local traffic.

When he landed in China, Wu rented a car to drive back to his hometown. The highways were so empty, he said, that he was often the only one he could see driving on them.

"It was the first time in my life that I've ever seen anything like this," he said. "Sometimes drivers from Hubei are not allowed to exit the highways. ... (I've heard that) some truck drivers have wandered on the highways for 20 days or so. They couldn't easily get off the road, so they had to survive on ramen packages."

Restricted traffic wasn't the only problem. Those who live in rural China are generally less informed of the severity of the virus, Wu said, and resources are particularly scarce in those areas. For his family, he said, it was difficult to buy masks.

"There are 12 people in my family," Wu said. "We had only two masks ... for whoever went out and bought groceries."

A time of prayer and worry

The sense of urgency followed Wu back to the U.S. The virus has led international governments to implement travel bans and advise travelers who recently visited China to self-quarantine for 14 days. As of Friday, 15 cases of coronavirus have been confirmed in the U.S., according to the Centers for Disease Control and Prevention.

No case has been confirmed in Mississippi, but Wu still stayed home for two weeks as soon as he arrived in Starkville. During the self-quarantine, he said, he video chatted with his family every day. Jiangxi province is among the provinces in China most affected, he said, and there was one case confirmed in the town of Qingni where he used to live.

"I think none of the Chinese really enjoyed the New Year this time," Wu said.

The spread of the virus made everyone wary of the gatherings, Sun said.

"The first question we normally ask any newcomer is, 'How long has it been since you've returned to the U.S. from China?'"

The church used to have an annual celebration of the Lunar New Year, which usually draws a crowd between 300 and 400, Sun said. As the virus continues to plague China, he said, the church decided to cancel it.

"With everyone worried about their family back home," Sun said, "I don't think a joyful celebration fits in that picture. ...We prayed for them and their families instead."

Amid the crisis, a sense of unity and hope

Saijuan Chen, a visiting scholar in poultry science at MSU, worried for her family's safety when the virus first broke out.

But, Chen said, she's not that anxious anymore.

Instead, she said she is excited to be part of a volunteer group made up of 176 Chinese scholars and doctors both at home and abroad. The group has been buying supplies and sending them back to China where resources are needed the most, she said.

A teacher at Hebei Agricultural University, Chen said her research focuses on animal viruses. Most of the group members attend the Excellent Going Abroad Expert's Training Program in Hebei Province as she does, an initiative of the Hebei government, she said.

"When someone in the group chat suggested that we donate resources to doctors in China, we hit it off immediately," Chen said. "Many of us had the idea; we just didn't know how to realize it."

More than half the group members are doctors who understand what is needed the most on the frontline, Chen said. Many have been assigned or have volunteered to go to Hubei to treat patients, she said.

"They tell us what they need and we buy them from abroad," Chen said. "We've bought hazmat suits and N95 masks, because those are of the highest demand.

"(One of us) is bringing back 300 hazmat suits (from the United Kingdom)," she added. "She set aside her personal belongings just to make room for them."

Yibin Wang, a PhD student in industrial engineering at MSU, said his friends in Boston told him that the city is running out of masks.

"I think people might have bought all of them to mail back home," Wang said.

Meanwhile, faced with a high demand for masks, some of the car manufacturers back home have altered their production line to make masks instead, Chen said.

'You have to think about it seriously'

As of now, Chen said, her family in Jiangmen, Guangdong is doing just fine. It has been more than a week since there was any new case confirmed in her hometown, she said.

"All eyes are on that number right now," she said. "And our emotions fluctuate with that number. (My family's) state of mind is very peaceful now."

Fei Yu, associate professor at MSU, said he is not too worried about his sister and his parents in Wuhan. Despite having to stay at home most of the time, the family has close access to the several grocery stores within walking distance, he said.

Even with more than 1,000 deaths in Wuhan, he said, the death rate is still rather low in the city of roughly 10 million people.

"I don't think you have to be scared of it too much," Yu said. "But of course you have to think about it seriously."