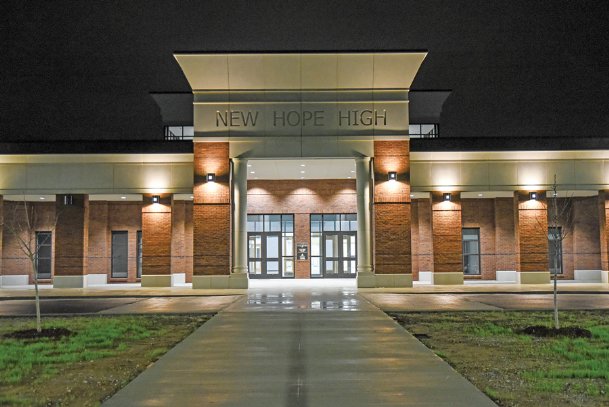 New Hope High School, pictured in this 2018 Dispatch file photo, has experienced dozens of roof leaks since completion two years ago. The $26 million facility was the most expensive paid for by a $44 million bond issue voters approved in 2015. Photo by: Dispatch file photo 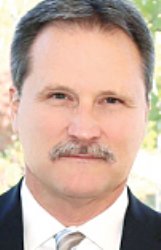 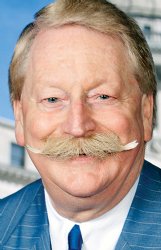 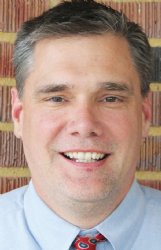 The roof at the 2-year-old New Hope High School building has leaked as many as 115 times, 38 of which are confirmed splits in the roofing material, project architect Joey Henderson told Lowndes County School board members during a special-call meeting Tuesday evening.

Henderson, general contractor West Brothers Construction and board members want to know why. But, so far, all New Jersey-based GAF Materials -- the manufacturer of the $1 million roof -- will tell them is the roof isn't the problem. If the impasse continues, school board members indicated the issue could be headed to civil court.

The board voted Tuesday to authorize Board Attorney Jeff Smith to send GAF a letter asking for results of two studies the company conducted on the leaky roof and urging GAF to communicate with Henderson as LCSD's designated agent for the project. Up to this point, Henderson told the board, the company has refused to release the findings of its own studies for "proprietary" reasons, and they have failed, at times, to communicate with Henderson, of JBHM Architecture, because he is an independent contractor for the district, not the "owner" of the roof.

"Joey ought to be able to speak for us as the owner's (LCSD's) agent," Smith told the board. "What I'm saying is GAF may not be acting totally in good faith."

The $26 million New Hope High School -- the most expensive facility paid for by a $44 million bond issue voters approved in 2015 -- was completed in early 2018. Columbus-based West Brothers subcontracted another local company, Lindsey Roofing, to install the roof that started having problems soon after completion.

Lindsey has repaired reported issues under a three-year installer's warranty, Henderson said. After that expires in 2021, GAF is supposed to cover the roof under a manufacturer warranty through 2038.

However, consultants for GAF twice studied the roof, and rather than releasing the findings to LCSD, simply told district representatives structural issues with the building -- or the building shifting -- were causing the breaks in the roof.

"But they won't tell us how it is structural ... or what part of the structure is causing the problem," Henderson told the board.

Henderson and West Brothers personnel have recently pressed the company for more details via email, but so far GAF has not responded, Henderson said.

A GAF spokesperson, speaking to The Dispatch this morning, said the company plans to send the findings to LCSD today.

"That was always the plan," the spokesperson said. "We've never had any objection to that."

Meanwhile, Henderson said he has asked three independent engineering consultants to look at the roof damage, and they have determined the problem relates to the roofing material or installation.

The board on Tuesday also voted for a formal study of the roof, in which Lindsey Roofing workers will remove a small piece of the roof for private consultants to examine, then the roofers will put the piece back on. That study will cost $3,775, half of which Henderson said West Brothers will pay.

Henderson said he is hoping to get a definitive answer in the next few months as to what is causing the roof leaks, but he expressed concern that might not be a simple task.

'The district needs to be made whole'

If there is no agreed conclusion to the cause, Smith said LCSD could file suit, presumably against GAF. If that happens, he said LCSD would have to front the cost of re-roofing the school and ask the court to reward reimbursement in the damages.

But if the problem is ultimately deemed to be a material or installation failure with the roof, the culprit -- be it GAF or Lindsey -- should be on the hook for any extra costs LCSD incurred on the road to fixing it, he said.

That includes, Smith and board members noted, consultant and study fees used to get to the root of the problem.

"The district needs to be made whole," Smith said. "They are going to want a release signed after any work is done (to fix or replace the roof), and I say we don't sign the release until we're made whole. That's the way to do it."

LCSD Superintendent Sam Allison, who was promoted in January after serving as principal at New Hope Middle School, said the roof leaks have already caused minor damage in other parts of the high school building.

"The records room comes to mind," he told the board. "It needs to be re-carpeted and repainted. There are several things after the (roof) gets finished that will also have to be fixed."

Speaking to The Dispatch after the meeting, Allison added, "It's just stuff that shouldn't happen in a new building. If I build a house and the roof leaks, I'm getting it fixed. ... I think we're on the right track now."