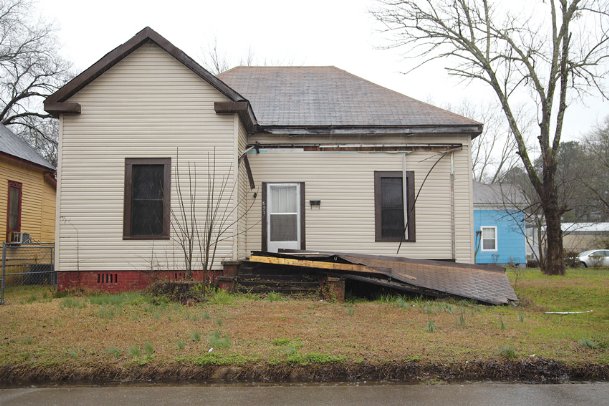 A vacant house Leroy Lacy owns on 12th Street North stands in the rain on Thursday morning. The front porch was knocked down by a police car that collided with his house in April. Though Lacy believes the city should be responsible for repairs, the city has declared the property derelict and has given Lacy 45 days to either demolish the structure or bring the lot up to code. Photo by: Yue Stella Yu/Dispatch Staff

A police car driving by had collided with another car and crashed into the vacant house he owns on 12th Street North, he said, knocking down the brick foundation supporting the porch. The roof of the front porch lies on the ground, detached from the main house.

At the time, Lacy expected whoever was at fault to pay for the repairs.

"I had nothing to do with (the damage). The house is not moving," Lacy told The Dispatch. "I shouldn't have to pay for something that I had no control over."

To this day, however, Lacy said he still hasn't received a definite answer as to who should pay for the damage -- the city or the driver of the other car in the collision. Meanwhile, the porch is left broken, he said, drawing complaints from the neighbors that resulted in him receiving building code violation notices from the city's Code Enforcement Department and hindering his efforts to sell the house.

The city listed Lacy's house as a derelict property and summoned him before the city council Tuesday night, giving him 45 days to demolish the house or bring it up to code.

If Lacy doesn't comply, the city can condemn the property and place a lien against his property taxes to pay for rehabilitating the lot.

Instead, Lacy has decided to cut his losses and demolish the house, which is not his residence.

But a burning question stuck with him as he came before the council -- who should have been responsible for the cost of the repairs?

The accident and pending litigation

A copy of the April crash report obtained by The Dispatch shows the accident took place at the intersection of Seventh and 12th streets North. The police officer, Aaron Andrew, said he was heading south with his emergency lights and sirens on when his car hit another on Seventh Street, the impact of which drove his car into a tree and eventually the house's porch.

Andrew claimed he had come to a complete stop at the two-way intersection, whereas the owner of the other car argued he was headed west when the police car hit him in the middle of the intersection.

A witness to the accident said in the report that Andrew's car was "traveling at a high speed" and "never stopped at the stop sign," but also remembered the other driver's car was headed east.

The police report showed that the police car "failed to yield right of way" during the accident.

Lacy, who had reviewed the report last year, told The Dispatch the insurance company determined that it was the civilian driver's fault. He told the council Tuesday he believed the accident report placed the responsibility on the city for fixing the porch.

"I just don't see how it's not the city's fault in that accident," Lacy said. "Now I'm getting a violation because a police car ran into the house."

Columbus Police Chief Fred Shelton declined to comment on the details of the police report, citing an ongoing lawsuit between the two sides involved in the accident, where the citizen is suing the police officer.

City Attorney Jeff Turnage said during the council meeting the city would have to discuss the matter in executive sessions due to pending litigation.

Ward 5 Councilman Stephen Jones, whose district includes Lacy's house, told The Dispatch the issue came before him for the first time at Tuesday night's meeting. He said he would work with Shelton to figure out what happened.

As the case is ongoing, Lacy still doesn't have his answers since he first asked the question 10 months ago. He said he wished that the city had discussed the matter a long time ago.

At this point, he added, he isn't trying to take actions against anyone but is merely demanding the answer as closure.

"It was just funny," Lacy said. "It was just to see if somebody could answer that question."