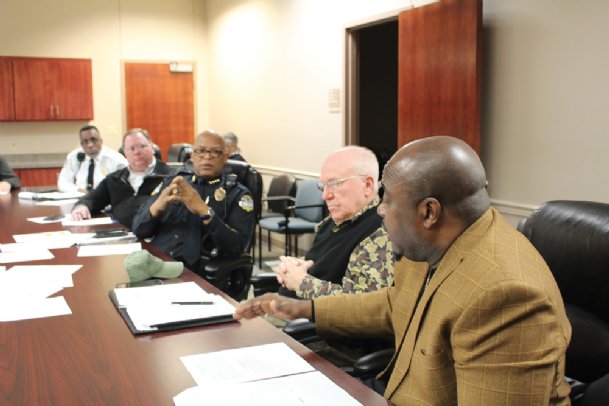 Columbus Police Department is looking to implement a training reimbursement agreement for officers trained to repay back the department for the cost of training if they resign within two years to join another law enforcement agency.

Police Chief Fred Shelton announced the policy at a meeting of the CPD Overview Committee Thursday, as part of a six-month plan to recruit new officers -- one that also includes holding a career day at the department in March and participating in a job fair at East Mississippi Community College in April.

Shelton and City Public Information Officer Joe Dillon both stressed that the policy is in the works and hasn't been formally implemented, but as the proposal stands, an officer who leaves prior to the first anniversary date of his or her hire must pay CPD $10,000, roughly the cost of training and outfitting a new officer. If an officer leaves before the second anniversary date of hire, he or she would have to pay the department $6,000.

Shelton said he got the idea from another law enforcement agency in the state. CPD has traditionally had problems with hiring young officers, paying those officers' way through police academy training and then losing those officers to other agencies within a few months.

He added because of Columbus' benefits -- such as health insurance and equipment -- several of the officers who resigned from CPD have returned to the department after some time away.

"Recently we've had some officers leave," Shelton said. "They thought the grass was greener on the other side. They have come back.

"One officer ... went to another agency and he was paying $900 a month for family insurance," he added later. "We're a lot better than that. When they look at the dollar amount and they want to work for $5 more, you may make some extra money, but what is the cost of living? So again, I don't necessarily want an employee who don't want to be here, but if an employee wants to be, I want to use encouragement and incentive (to keep them here)."

The department currently has 56 officers, including a full command staff and seven officers currently training at the police academy, Shelton said. The department has also received 35 applications, though Shelton stressed that those applicants have not yet taken a physical training test, psychological evaluation or the numerous other exams required to be a police officer.

CPD is budgeted for 61 officers.

Shelton said the issue of police officers leaving and returning is not unique to Columbus and pointed to pending legislation currently in the Mississippi Senate that would make it mandatory for law enforcement agencies that hire a probationary officer from the department that trained them to repay the department the full cost of training and outfitting that officer -- something Shelton said agencies were supposed to have been doing all along, but haven't.

"They haven't been paying," he said. "However, this will be law. They will be mandated to pay us."

The bill, Senate Bill 2037, amends state law to "revise the time during which a governmental agency must reimburse the formerly employing governmental entity for the costs incurred by that entity for the officer's law enforcement training." Previously, the law applied to agencies that hired officers within three years of their hire and training by another agency, but the agencies only had to reimburse them part of the training. If the amended law passes, the agencies will have to pay the full amount of training if they hire an officer within two years of that officer's hire and training.

Sen. Chuck Younger (R-Columbus) told The Dispatch he didn't know anything about the bill right now and would have to read over it to know whether he would support it.

At an answer to a question from board member Colin Krieger on Thursday, Shelton said that apart from the command staff, the majority of CPD's force has less than five years law enforcement experience.

But Krieger said that's not necessarily a bad thing.

"That's good and bad," he said. "You can mold them how you want. Some of them are from the community."

But as fellow board member Leroy Lollar pointed out, "That puts a lot of pressure on veteran (officers)."