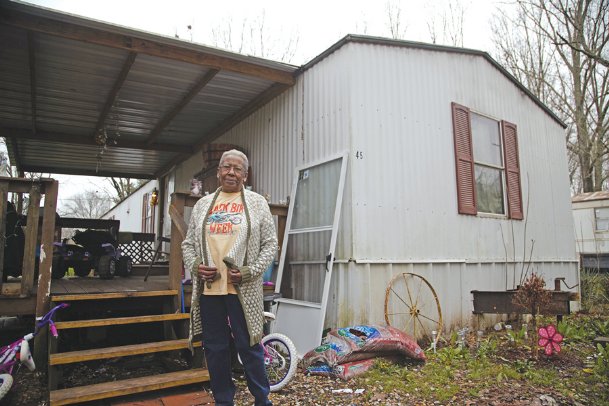 Lucy Henley, 75, stands in front of her mobile home in Crawford on Wednesday. In the 1990s, she said, a storm lifted her trailer up with her and her seven children in it. All she could do was to pray, she said. Photo by: Yue Stella Yu/Dispatch Staff

Bessie Scott, 88, lives with her daughter in their aluminum home in Crawford. Scott needs to be on oxygen every night, her daughter Rosie Scott said. The mother and daughter go into "survival mode" and hide in the bathroom at the center of the house whenever a storm passes through, Rosie Scott said.
Photo by: Yue Stella Yu/Dispatch Staff 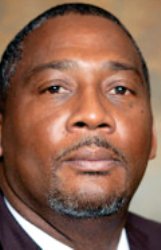 When a storm passed through Crawford in the 1990s, Lucy Henley had nowhere else to hide.

Staying in her mobile home on Tolan Street with seven children at the time, she said, she could feel the bottom of her home lifted off the ground by the gusty winds.

And when she prayed, she said, she could feel the trailer setting.

But that storm left Henley scared, as did every other storm that followed.

Looking back at the tornado that ripped through North and East Columbus last February, which damaged hundreds of homes, Henley shook her head.

"Where can they go?"

Henley is one of the many mobile home owners in Crawford.

Deane Parsons, Henley's sister and the town's mayor, said there are more than 100 mobile homes in the town of 631 residents. Many occupants are senior citizens who are bedridden or on oxygen.

"We have alarms go off (when storms come through)," Parsons said. "But where can they go? What can they do?"

There is no public storm shelter in Crawford. Lowndes County officials have told The Dispatch there is only one storm shelter -- a small concrete one that can fit 15 to 20 people -- west of the Tombigbee River in the county.

So whenever Henley has to grab her children and leave her trailer before a storm hits, she crosses the street to seek shelter at Parsons' brick house. When Hurricane Katrina hit the Gulf Coast in 2005 and brought severe storms to the Golden Triangle, she said, she remembered the view from the brick house of straight-line winds bending trees and pushing over trailers in its way.

"You ain't got no chance in the tin," Henley said. "(And) I know the brick house ain't gonna save us."

Amy Brown also lives in a mobile home with her two young children in Artesia. The three run to her father's brick house when the tornado sirens go off.

But, Brown said, she knows that house is no storm shelter.

"(A storm) can also do the same thing to a brick house as it did to mobile homes," Brown said.

Rosie Scott lives with her 88-year-old mother, Bessie Scott, in a house with an aluminum exterior in Crawford. When storms come through, the two hide in the bathroom at the center of the house.

The Columbus tornado left many without homes, she said, but the city has more resources than her town does.

"If that disaster comes to Crawford and wipes Crawford out, ... where would (the survivors) go? How would they get help?"

Months after the February 2019 tornado, the city of Columbus applied for a $62,000 federal grant to build 11 storm shelters in the five fire stations across the city, which was recently approved by the Federal Emergency Management Agency, city spokesperson Joe Dillon said.

But the county has not found a way to add storm shelters to rural areas.

Parsons said she had hoped to build a storm shelter in the Crawford Elementary School gym, which is now being renovated. The county's board of supervisors rejected the idea in January, citing lack of remaining funds designated for the gym project.

"Over the last few years, those storms have become more frequent," said District 4 Supervisor Jeff Smith, whose constituency includes Crawford. "The lack of having storm shelters creates a sense of uncertainty and un-safety throughout the communities."

Henley said she's been through storms so many times she can already tell the signs before a storm strikes. Whenever the clouds turn dark, the weather turns hot and everything quiets down, she knows it is time to leave.

"We really need (a storm shelter)," she said, "because I'm tired of being scared. I've been scared all my life."